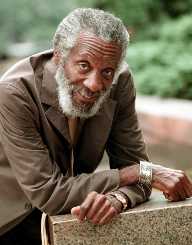 Richard Claxton Gregory, commonly known as Dick Gregory was born on October 12, 1932, in St. Louis, Missouri. He was an African-American comedian and a political activist who used his wit and humor to relay his message about world peace and civil rights.

Dick Gregory was born to Lucille, a housemaid and Presley Gregory in St. Louis. He was the second born in a family of six children. His family lived in abject poverty, and at an early age, his father deserted the family. This forced the mother, a housemaid, to labor for many hours to support the family.

At nine years old, he was the subject to a racist attack for touching a white woman’s leg while shinning her shoes. Gregory learned to defend himself against childhood bullies using comedy.

Dick Gregory went to Summer High School courtesy of the support from the teachers. He excelled at running and gained a track scholarship to Southern Illinois University. He received the school’s Outstanding Athlete Award, setting records as a miler and half-miler in the process.

His success in athletics saw him drafted into the United States Army in 1954. This interrupted his college career for two years. He started performing stand-up comedy while serving in the army. He won a talent contest and subsequently became a member of the army’s entertainment division.

Dick Gregory was discharged from the army in 1956 but never received a degree when he rejoined the university. His desire to perform professional comedy saw him relocate to Chicago the same year. While in Chicago, he served as a master of ceremonies at the Esquire and Roberts Show Clubs. He worked as a comedian in nightclubs and as an employee of the United States Postal Service during the day.

Gregory’s breakthrough came in 1961 at Hugh Hefner’s Playboy Club in Chicago. On this occasion, his audience was a group of white executives from the South. His excellent performance earned him an extended run at the club, and he used the opportunity to grow into a national comedy headliner.

Dick Gregory also made history the same year, becoming the first African-American to appear on Jack Paar’s “Tonight Show.” The invitation came after he had expressed his desire to chat with the host in the same manner the white entertainers did. This appearance was followed by a series of invitations, making him a recurring guest on the show.

During the 1960s, Dick Gregory was at the forefront of the Civil Rights Movement and was arrested several times because of his activism. His friends at this time included pivotal figures such as Medger Evers and Dr. Martin Luther King Jnr. He was an outspoken antagonist of racial discrimination in America and the American involvement in Vietnam.

In 1966, he organized fundraising ceremonies and shipped 10000 pounds to feed the hungry people in Mississippi. He traveled to several countries as part of his missions of activism.  He went to Ethiopia on multiple occasions to campaign against hunger and France to object the French involvement in Indo-China.

Dick Gregory lamented the absence of health food stores in Black communities. To curb this issue, he established the Dick Gregory Health Enterprise in Chicago which he used to create awareness on the importance of natural foods. The two groups who gained a lot from this enterprise were the poor and Black civil rights groups. A more significant percentage of the profits obtained from the sale of products was always given to them.

He played a vital role in the search for three missing civil rights workers in 1964. The workers had disappeared in Philadelphia, and through Gregory’s efforts, the FBI managed to find the three bodies 44 days later. He unsuccessfully ran for Presidency in 1968 with fellow activist Mark Lane as his running mate in certain states.

Dick Gregory married Lillian Smith in 1959, and they had eleven children. One of their children, Richard Jr., died in infancy. He was a very spiritual man and preached the attainment of oneness with a “Godself.” He viewed this as the most satisfying state of being.

Dick Gregory assumed a vegetarian diet and examined diet-related issues within African-Americans. He occasionally went on hunger strikes to create awareness on many global issues such as the apartheid regime in South Africa, the Vietnam War, police brutality and women’s rights.

He founded a weight loss business known as the Slim/Safe Bahamian Diet in the 1980s. Multi-level distribution rights to this nutrition formula were sold for $100M in 1984. The diet was made a favorite among the general public by articles in People and USA Today.

Dick Gregory's efforts earned him an opportunity to be Dr. Martin Luther King Jr fifth annual Guestship speaker at Elmhurst College. He was an author of several books including Nigger: AnAutobiography (1964), No More Lies: The Myth and Reality of American History (1971), Dick Gregory’s Natural Diet for Folks Who Eat: Cooking With Nature (1973).

In his later years, Dick Gregory efforts were centered in the health food industry. He advocated for a raw food and vegetable diet. He went on extreme fasts and lost much weight in the process. He developed “Bahamian Diet Nutritional Drink” which he promoted on TV shows to help curb obesity.

He supported the conspiracy theories about the assassinations of John .F. Kennedy and Martin Luther King Jr. Gregory turned away from stand-up comedy for some period. He stayed away from the clubs where alcohol was served until 1996 when he made a comeback with his comedy show,” Dick Gregory Live!”

Dick Gregory was diagnosed with lymphoma in 1999. He declined chemotherapy and instead switched to herbs, vitamins, and exercise to manage the condition. He had been hospitalized in Washington, D.C a week before his death. The diagnosis showed a bacterial infection.

Gregory died on August 19, 2017, at the hospital. He was 84 years old at the time of his demise. His death was a great loss to both the entertainment industry and the political platform. Fans and celebrities took to social media to pay their last respect to the legendary icon.