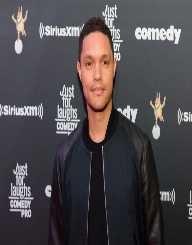 Trevor Noah was born on February 20th, 1984. His place of birth was in Soweto, South Africa. Besides being an international stand-up comedian, Noah is famous for being an actor and a producer. His TV career has also brought him to the spotlight with his role in The Tonight Show With Jay Leno and also in the Late Show With David Letterman. He recently took over as the host of The Daily Show in 2015. At first, he was the correspondent to the show, but after Jon Stewart departure he was given the opportunity to host it.

Born on February 20th, 1984, Trevor Noah rose to become a comedian, a career that has earned him high acclaim. He is the son of Robert and Patricia Nombuyiselo Noah. His father is a Swiss-German native whereas his mother is a South African native. When Noah was young, he was taken to one of the Catholic schools in Johannesburg called Maryvale College. Because he was born during the apartheid period, his parents’ relationship was not considered as legal.

Trevor Noah began his acting career when he was in his late teens. He landed a role in a South African based soap opera called Isidingo. With time, he switched careers and began hosting his radio show popularly known as Noah's Ark. He also did not spend much time on this career as he dropped it to try comedy. Taking his comedy career seriously, he has been on stage with other famed South African comedians such as Riaad Moosa, Kagiso Lediga, Marc Lottering, Nik Rabinowitz and Barry Hilton. On the international scene, he has performed alongside comedians with the likes of Carl Barron, Paul Rodriguez, Paul Zerdin and Dan Ilic. Some of the notable performances that he landed on during his early comedic performances are taking on opening acts for Russell Peters while touring South Africa and for Gabriel Iglesias in late 2007.

The turning point of Noah’s career came in the year 2009. During this time, Trevor Noah directed his show called The Daywalker. This show was recorded as a documentary. During the same year, he gained high acclaim for being The South African Music Awards host. The following year, he remained active on TV by featuring in his talk show dubbed Tonight With Trevor Noah. On the international scene, he also toured Edinburgh Fringe festival in Scotland where he also made his performance. At this festival, he also ran a one-man show called The Racist -2012. This year was successful for Noah as he made his first appearance on U.S. TV in The Tonight Show With Jay Leno. He was the first African comedian to feature on the show. Climbing up the ladders of his comedic career, he featured in Trevor Noah: African American in 2013; this was his show on Showtime. A year later, he landed on another important role as a correspondent in The Daily Show With Jon Stewart.

There are several languages that Trevor Noah speaks which makes him a polyglot. He is fluent in English, Zulu, Sotho, Tsonga, Xhosa, and Afrikaans. He is also known to be good in Spanish and German. Little information is known about Noah and his relationships.