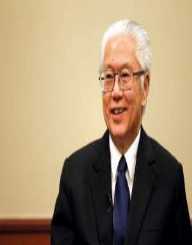 Tony Tan Keng Yam was born on the 7 February 1940 in Singapore. His parents were Tan Seng Hwee and Jessie Lim Neo Swee.

Tony Tan began his education at St Patrick’s School in Singapore. He then enrolled at St Joseph's Institution for his high school years, after which he won a scholarship to the University of Singapore and obtained a degree in physics. He later did his Masters at the Massachusetts Institute of Technology and was awarded a doctorate from the University of Adelaide in Australia.

After completing his education, Tony Tan taught physics and mathematics at the University of Sydney for five years (1964-1969). He was then offered a job with the Overseas-Chinese Banking Corporation (1969-1979).

Tony Tan left the cabinet in 1991 but stayed in parliament. He then became chairman and CEO of the OCBC before returning to a cabinet position in 1995. He then became Deputy Prime Minister as well as Minister for Defence. In 2003, he had the added responsibility of being a minister of both security and defense. Between 1995 and 2005, he was Deputy Prime Minister. He then left the cabinet and became the Chairman of the National Research Foundation, Deputy Chairman of the Research, Innovation and Enterprise Council and Executive Director of the Government of Singapore Investment Corporation and Chairman of the Singapore Press Holdings Limited.

In 2010, Tony Tan decided to run for the presidency, and in 2011, he was elected as the seventh president of Singapore

Tony Tan’s wife is Mary Chee Bee Kiang. They have a daughter and three sons.

In 2015, Tony Tan was awarded the Defence Technology Medal, the Pinnacle Award. He received this for his work in reorganizing Singapore’s armed forces. He has received many other awards and honors including the Foreign Policy Association Medal presented by the New York Foreign Policy Association. This as for his outstanding leadership in both the private and public sectors. Tan was also inducted into the Honorary Senate of the Foundation Lindau Nobel Laureate Meetings (2012). He has also received some honorary doctorates.