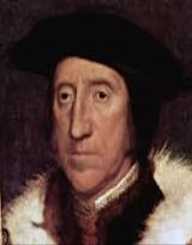 Thomas Howard was an English nobleman and an influential politician during the reign of the Tudor dynasty. He was born on March 10, 1473, to Thomas Howard, 2nd Duke of Norfolk and his first wife Elizabeth Tilney in Kenninghall, Norfolk, England. In 1524, he succeeded his father and became the 3rd Duke of Norfolk. He served King Henry VIII in various capacities and held many high profile portfolios in different high offices during the rule of the King.

His father and grandfather both supported the losing side and assisted the Yorkist King, Richard III by fighting in his favour at the Battle of Bosworth. Howard had to fight his way back to restore the royal support, which was revoked after his father and grandfather fought for the defeated side. In 1497, he fought for the crown and participated in the battle against the Scots and the Cornish rebels. He received the most prestigious British order of chivalry, Knight of the Garter in 1497 after King Henry VIII assumed power.

Thomas Howard was a competent soldier and participated in many military operations. When Henry VIII acceded the English throne, he developed an excellent rapport with the King and quickly became his close companion. On May 4, 1513, the King appointed him as Lord Admiral. Immediately after receiving such a prominent position, Howard defeated the Scots on September 9 at the Battle of Flodden. Among his many assignments in favour of King Henry VIII, he escorted Mary, the sister of the King, to France on the occasion of her marriage to King Louis XII of France.

A riot broke out on May Day in London, and Thomas Howard managed to thwart the rioting crowd with the help of his soldiers. He became the Lord Deputy of Ireland on March 10, 1520. However, soon afterward, Henry received a call from the King to command a fleet to start naval operations against France. Hence, his endeavour to keep Ireland in order came to a halt. The exercise spread upon two years inflicted substantial damage and casualty in France and devastated many important cities there. Though the destruction was massive, the exercise was not much fruitful. Eventually, Howard abandoned the naval exercise.

Thomas Howard came back from his naval exercise in July 1522. On December 4, the same year, he took up the position of Lord Treasurer in place of his retiring father. On May 21, 1524, he became the 3rd Duke of Norfolk succeeding his father. His war-mongering mentality caused direct conflict with Cardinal Thomas Wolsey, who favoured negotiation and diplomacy in the handling of foreign affairs.

During the mid-1520s, King Henry VIII developed an attraction for Anne Boleyn. She was one of Howard’s nieces. In the process, Thomas Howard became quite influential. He helped the King in annulling his first marriage to Catherine of Aragon. Subsequently, the King tied the nuptial knot with Howard's niece.

By the late 1520s, Howard assumed higher power and handled the matters of state with increasing authority. In connivance with the Duke of Suffolk and the Boleyn, Howard put pressure on the King to remove Cardinal Wolsey. In November 1520, the King arrested Cardinal on charges of treason. However, Wolsey died before facing the trial. Howard became the prime beneficiary after the exit of Wolsey. King began taking his advice regularly on the matters of national importance.

The lifelong service and loyalty of Thomas Howard to King Henry VIII brought him a generous amount of rewards. Such awards varied in type and kind and included ample monastic lands in Norfolk and Suffolk, leading the delegation of prestigious diplomatic missions and naming of Knight of the French order of Saint Michael.

In 1532, he received the said award and followed it on May 28, 1533, with the Earl Marshal of England award. In an exhibition of the ample clout he possessed over the King, he presided over the trial of his niece, Anne Boleyn. Anne was the second wife of King Henry VIII and was beheaded after her arrest and subsequent conviction.

Thomas Howard married Anne of York, who died in 1511. In 1513, he married Lady Elizabeth Stafford. Their marriage fell into rough weather when in 1527; Howard began keeping a mistress, Elizabeth Holland. Howard lodged his mistress in his household. Elizabeth Stafford, his second wife, officially separated from him in 1530. Later, she accused Howard of maltreating her, including physical violence.

His clout over the King decreased after the rise of Thomas Cromwell, chief minister of the King. On December 12, 1546, the King's men arrested both Thomas Howard and his son Henry Howard, Earl of Surrey. Howard’s arrest was made on the charges of being an accessory to his son’s purported treasonable activities.  The father-son duo were both condemned to death.