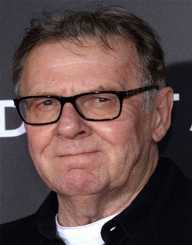 Thomas Geoffrey Wilkinson was born 5th February 1948, to Thomas and Marjorie Wilkinson. He was born in Wharfedale, West Riding of Yorkshire, in England. When he was four years old, the family moved to Canada, but several years later they returned to the UK, where his parents ran a pub in Cornwall.

Tom Wilkinson studied at the University of Kent and went to the Royal Academy of Dramatic Art.

In 1976, Tom Wilkinson made his movie debut in a Polish film called Smuga cienia. He followed this up with his television debut in 1979 in an episode of Crime and Punishment. He had regular work on television, but up until 1997 only worked sporadically in movies.

He has also been in over 40 television series or television movies, including the mini-series First Among Equals, Inspector Morse, and Prime Suspect.

Tom Wilkinson has been nominated for over 50 awards and has won 11 of them. His wins include a Golden Globe Award, two Screen Actors Guild Awards, and a British Academy Award.

In 1988, Tom Wilkinson married Diana Hardcastle, an actress. The couple has two daughters.