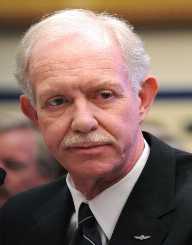 Chesley Burnett Sullenberger III was born 23rd January 1951, in Denison, Texas, in the United States. Living near an Air Force base, Sullenberger developed an early interest in aircraft and flying. He was an extremely bright child, and as a teenager was a member of Mensa International. He graduated from Denison High School in 1969.

Sullenberger started to learn flying in 1967 when he was 16 years old. In 1969, he enrolled in the United States Air Force Academy. He entered the cadet glider program, but also continued with other studies, and achieved his Bachelor of Science while at the Academy.

Chesley Sullenberger has two master’s degrees, one from Purdue University in Industrial Psychology, and one from the University of Northern Colorado in Public Administration. These were both completed as part of his tenure at the Air Force Academy.

When Chesley Sullenberger graduated from the Academy, he was commissioned as an officer. He then entered the Undergraduate Pilot Training program, and in 1975 graduated as a pilot in the Air Force. His time as a pilot included being based in the UK for a time before returning to Nevada in the U.S. He worked his way through the ranks until he was a Captain, and he was a training officer that taught other would-be pilots.

In 1980, Sullenberger joined the private sector and began working for US Airways. In 2007, although he was still working for the airline, he established a company called Safety Reliability Methods, Inc, which offered guidance for improving safety, along with reliability and performance.

On 15th January 2009, Flight 1549 for US Airways, was being captained by Chesley Sullenberger and his co-pilot, Jeff Skiles. Just after the plane took off, it got hit by a large flock of Canada geese, which caused both engines to fail. His training kicked in, and in a matter of moments, he realized that he couldn’t make it back to LaGuardia Airport where he had departed from. He decided the best course of action was to bring the plane down on the Hudson River.

Sullenberger successfully landed the plane on the river, and all passengers and crew survived, 155 people in all. He waited until everybody else was safely off the plane before leaving himself. It was ruled by the National Transportation Safety Board that the right procedures had been followed by Sullenberger, and landing in the river was the right decision.

He was congratulated personally by both President Bush and President-elect Barack Obama, whom he met at the presidential inauguration ceremony in January 2009, along with his crew. In February of that same year, Sullenberger spoke to the Subcommittee on Aviation in support of increased salaries for pilots so that experienced pilots would be attracted to take the work offered by airlines. In his eyes, the most valuable thing about safety in the aviation industry is experienced pilots.

Chesley Sullenberger retired from US Airways in 2010 after 30 years of service. He published an autobiography, Highest Duty: My Search for What Really Matters, which was co-written by Jeffrey Zaslow. His follow-up book, Making a Difference: Stories of Vision and Courage from America’s Leaders, was published in 2012.

He was hired by CBS News in 2011 as an industry expert for aviation and safety. He worked with NASA concerning errors in the aviation industry and served on several safety boards including the National Transportation Safety Board, and developed a course called the Crew Resource Management Course which helped train crews how to handle emergencies.

Among his awards and honors, Chesley Sullenberger has the following:

2009:   Awarded a Masters Medal by the Guild of Air Pilots and Air Navigators

2010:   Appointed an Officer of France’s Legion of Honour