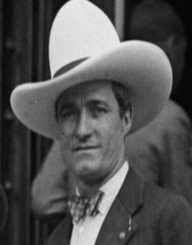 Tom Mix was born in the village of Mix Run, Pennsylvania, on January 6, 1880. His father, who was a stable master for a wealthy merchant, taught him how to ride and take care of horses. This started his lifelong love for these animals. He was also interested in the circus, and he often practiced tricks at home.

He worked a variety of jobs before becoming an actor. He helped out on farms in Texas, Wyoming, Montana, and Arizona. He enlisted in the army during the Spanish-American war in 1898. In 1905, he participated in the inaugural parade for President Theodore Roosevelt, serving as a horseman.

Tom Mix moved to Oklahoma where he started many jobs, including bartending. He even became a sheriff in Dewey for a brief period. Later, he got a job at the Miller Brothers 101 Ranch. It was one of the biggest ranches in the country, and it hosted its own Wild West show. He participated in the show as a horseman and as a shooter.

At the time, the Selig Polyscope Company was looking for talented horsemen to appear in their Western films. Mix managed to impress them with his skills. He first started as a supporting cast member. His first role was in a short film called The Cowboy Millionaire, released in 1909. A year later, he appeared in the documentary Ranch Life in the Great Southwest.

He played himself, and he showed off his animal wrangling skills. The film managed to achieve quite a success, and he became a well-known star. He went on to star in more than a hundred movies made by Selig. Most of them were shot in New Mexico.

In 1917, Tom Mix signed with Fox Studios. The films he used to shoot with Selig had a documentary style. The new films he started shooting focused on the action and the story.

He was depicted as a brave cowboy who always managed to save the day. He did his stunts, so he frequently got injured. He became known for his extravagant style. Apart from him, even his horse Tony managed to become famous.

Tom Mix shot some of his most famous films in the 1920s. They included Star Rangers, Destry Rides Again, and many others. In 1928, he became the best-paid actor in Hollywood.  In the 1930s, he shot a few talking films made by Universal Studios. His last on-screen work was the serial called The Miracle Rider, produced in 1935.

Tom Mix was involved in multiple side-projects during the length of his acting career. He helped organize rodeos, such as the Calgary Stampede. He performed in different Wild West shows. He also appeared with the circus.

In 1933, Mix permitted the Ralston Purina Company to produce a radio series called Tom Mix Ralston Straight Shooters. He was not able to voice himself because of his many injuries. Instead, he was played by different actors. The show ran until the early 1950s.

Tom Mix was married five times. His first two wives were called Grace Allin and Kitty Jewel Perinne. Both of those marriages lasted about a year. In 1909 he married Olive Stokes, and they had a daughter named Ruth. In 1918, he married his co-star Victoria Forde, and they had a daughter named Thomasina. He married his fifth and final wife, Mabel Ward, in 1935.

Mix’s turbulent life and extravagant spending often left him broke, even though he was one of the highest-paid Hollywood actors.

Tom Mix died in a tragic car accident in Arizona on October 12, 1940. He came upon a bridge that was under construction, and he was unable to stop in time. He was buried four days later in Glendale, California.