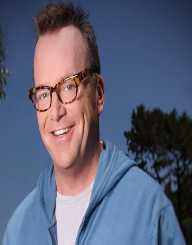 Tom Arnold is an American Comedian and actor born on March 6th, 1959. He is best remembered for his role in True Lies which was also a breakthrough for the talented comedian. He starred with the star actor Arnold Schwarzenegger in the film. Also, for four years, Tom hosted The Best Damn Sports Show Period. He has also featured in many movies including Oranges, Madea's Witness Protection April Showers and The Bad Penny.

Before Tom Arnold became well known, he earned a living as a teenager at a meat packing plant. While studying in the university, he entertained other students with his comic stand up comedies. He also served as a bartender at the University of Lowa.

Tom Arnold was born on March 6th, 1959. His place of birth was in Ottumwa, Iowa in the United States. He was the son of Jack Arnold and his wife, Linda Kay. Sadly, his parents divorced when he was only four years old, and Jack remarried. He has six siblings.

Tom Arnold attended Ottumwa High School and later Indian Hills Community College. He also studied writing and business education at the University of Lowa. While there he performed stand up comedies.

Tom Arnold began his acting career with Tom Arnold and the Fabulous Goldfish Revue at the beginning of the 1980s. This was after he settled in Minneapolis. He then met with his future wife Roseanne Barr who was also a comedian. The two became quite close and began touring together as they performed.

In 1988, Tom Arnold emerged as the winner of the Minneapolis Comedy Competition. He also began acting in The Roseanne Barr Show of HBO. He later acted in three sitcoms: Roseanne, Tom, and The Jackie Thomas Show. However, he was later fired from Roseanne.

In 1997, His TV show premiered with the title The Tom Show. Sadly, the show was canceled just after its first season after it proved unsuccessful. Later in 2003, he was appointed to co-host Fox Sports’ The Best Damn Sports Show Period. The show was of great success and received high ratings. Therefore, Tom continued hosting it for four consecutive years.

In 2004, Tom Arnold acted as Elvis Hunkee in Soul Plane comedy. He was later given a lead role, acting for the first time in a romantic film in 2005 titled Happy Endings. In this year, he also wrote the comedy The Kid & I and assumed the role of the lead act.

Since 2007 till 2012, he acted in many other supporting roles in films such as One Day, Hit and run, and The Great Buck Howard.

Tom Arnold has also voiced for The Replacements and The Rosie and Buddy Show. He has also lent his voice for Legend of Kung Fu Rabbit, Dennis the Menace in Cruise Control and Beethoven's Christmas Adventure.

In 1990, Tom Arnold wedded Roseanne Barr, an actress whom they together had a role in Roseanne a popular sitcom. She was also a well-known comedienne. However, their union came to an end after four years of marriage. Supposedly, the marriage ended due to the alcohol and drug addictions of Tom.

Subsequently, he tied the knot for the second time in 1995 this time, to Julie Champnella, a hairstylist. Four years later, the marriage ended in divorce once again. In 2002, a political consultant Shelby Roos became his wife. They parted ways after six years upon which

He tied the knot for the fourth time to in 2009, to Ashley Groussman. She is a home organizer. Later in 2013, they were blessed with a baby boy called Jax.