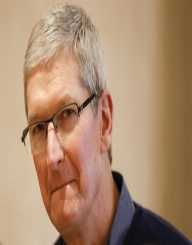 Steve Jobs was the co-founder of Apple Inc., but after his death on August 5, 2011, Tim Cook was named as the new CEO on August 24, 2011. Before Tim worked as the Apple’s Chief Operating Officer, who majored in company’s operations and worldwide sales. He also led Apple’s Macintosh where he strategized the suppliers and resellers relationship. He ensured flexibility was met to increase the demand market margin.

Apple Inc. is regarded as the second largest technology company globally. In all, Tim is also the first Fortune 500 Chief Executive to come out as gay early in 2014. Need I say more? Tim Cook is the highest paid executive not only in the US but worldwide according to Forbes magazine.

Timothy Donald Cook was born on November 1, 1960, in Robertsdale, Alabama, United States. His father worked in a shipyard while his mother worked at a local pharmacy. Tim is an American national and white ethnicity. He attended Robertsdale High School. He later joined Auburn University where he earned B.S degree in industrial engineering in 1982.

With determination and zeal, Tim Cook received a Master’s Degree in Business from Duke University. After his graduation, Tim spent the rest of his twelve years in IBM company. He acted as the principal director of North American fulfillment. Shortly after, he became the Chief Operating Officer of Intelligent Electronic in Apple In.He also served as the Vice President for Corporate Material at Compaq. In 1998 Cook teamed up with Steve Jobs and joined the Apple Inc.

In his starting phase at Apple, Tim Cook worked as Senior Vice President to conduct worldwide operations. In the meantime, Cook brought extensive changes that led to the growth of Apple Inc. He kept the flow of distribution and consumers by making sure that the company had the latest designs as well as affordable cost. In one week, the firm earned a triple profit, unlike other years. He has a unique talent that allows him to manage and promote the Apple Inc. to the next level.

In 2007 Tim Cook was promoted to the Chief Operating Officer position, and later in 2009, he became the CEO of the Apple Company. Steve Jobs opted to give him the job since he was on leave due to health problems. But at the same time, Steve made the final decision. After two years, Steve Jobs resigned, and he remained to govern the Chairman of Board of Directors. Tim Cook was approved as the CEO of Apple Inc.

As the CEO of Apple Inc. Tim Cook made changes that added success and profit in the firm. He began to play an active role in bringing out concrete strategies and meeting with other board members. He started his approach by focusing on people and executing what they believe was right and not what he thought. By 2013 Apple had already increased their donations to Charity by 30%. He later hired the Environmental Protection Agency, Lisa Jackson. She played a significant role in renewing the firm’s energy activities.

Tim Cook took a chance on expanding the IPad and iPhone lineup. The company came up with a new size model iPhone Plus model and the regular sized model. It comes with 5.5-inch display size. The iPad lineup wasn’t left behind. The firm introduced a 7.9-inch ‘Mini’ iPad as well as a 12.9-inch ‘pro’ IPad. His most significant release was when he released an Apple smartwatch.

In 2014 Tim Cook received an Alabama Academy of Honor that is regarded as the highest honors. In 2015 he garnered an ordinary doctorate from George Washington University. It was later announced that in 2015 Tim would come to donate his fortune to charity.

Besides his busy and scheduled life, Tim Cook loves to keep fit. He likes to jog, hike, cycle as well as going to the gym. His health status is up to the core. When it comes to his personal life, Cook is a gay. He hasn’t yet confirmed in public, but he fully supports the rights of bisexual, gay and transgender grouping.

In 2014, Tim Cook announced that he will always be proud to be a gay and considers it as the perfect gift from heavens. He is not yet married, and there is little to no information about his other partner. One word: Tim is a workaholic kind of guy.