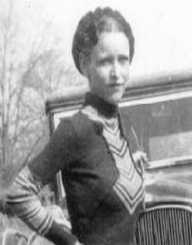 In Rowena Texas On October 1st, 1910 Bonnie Elizabeth Parker was born to Charles and Emma Parker. She was the middle child of the family. She had One younger sister and one older brother. When she was just four years old, her father had passed away

Bonnie Parker loved poetry and literature. And while she was at school, she was always an honor student. She had dreams of becoming an actress when she got older. But that was never to be

When she was a young teenager, she met a boy named Roy Thornton. They fell in love, and she got a tattoo of her and his names on her right thigh to celebrate their love. In September of 1926 just before her sixteenth birthday, they got married. But Roy began to become abusive to Bonnie. But then when he went to jail for robbery and was sentenced to five years. They were never divorced, and they never saw one another again.

In January of 1930, she met Clyde Barrow. She was 19 years old, and he was 21. They then fell in love. But soon after Clyde was arrested for burglary, and, was sent to jail. So, Bonnie smuggled a gun into the prison for Clyde, and he used it to escape. He was then recaptured and sent back to prison. But when he was paroled in February of 1932, he went back to Bonnie.

Bonnie and Clyde were joined by William Daniel Jones, Ivan M. Barrow (Clyde’s brother), and Blanch (Ivan’s wife). This made five people in their gang. Raymond Hamilton was part of the group until November of 1932.

Ivan was mortally wounded on July 29,1933, and Blanch was captured. William was also arrested in Huston Texas in 1933. Bonnie and Clyde went on by themselves. A trap was set by a Dallas Texas sheriff and his deputies on November 22, 1933, but the two escaped the trap.

Bonnie and Clyde broke Raymond Hamilton and four other prisoners out of the Eastern state prison farm in Waldo Texas. Two guards were shot with automatic pistols. Then on the first of April in 1934 Bonnie and Clyde shot two highway patrolmen near Grape Vine Texas. Then they killed a constable in Miami, Oklahoma and also abducted a police chief and wounded him.

During their crime spree, the couple loved posing for pictures and Bonnie smoked cigars. They stole cars, cash, and food, they robbed banks and shot and killed people throughout several states. They robbed mom and pop stores and sometimes they would break and steal from gumball machines. Articles, newsreels, movies, and tv shows made them out to be folk heroes.

A Texas Ranger named Frank Hamer was hired in February of 1934 to track them down. It was then on May 23, 1934, that Bonnie and Clyde were driving a stolen Ford sedan and was alone outside Gibsland Louisiana. There is where they were ambushed and shot to death.

Bonnie Parker had written poems and dreamed that when they died that they would be buried side by side. But that was also not to be. They were both buried in separate cemeteries. Although she had never seen her husband again and she was with Clyde she had her wedding ring on her finger when she died.