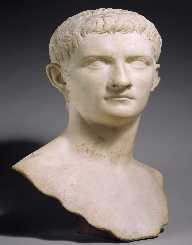 Tiberius's childhood is not well recorded, and first information about him comes from 32 BC when he was nine years old and delivered the eulogy for his biological father. He was also together with his stepfather in the triumphal chariot ride in celebration of the defeat of Anthony and Cleopatra at Actium. During 23 BC Augustus health started to deteriorate and the topic about his heir became one of the acutest in the empire.

A series of potential heirs were selected, including Tiberius and his brother. The following year, Tiberius, then 17 years old, entered politics and received the position as quaestor. He was granted the right to be elected as praetor and consul, five years in advance of the required age.

After entering politics, Tiberius began to appear as an advocate in the court. He became interested in Greek rhetoric. He was sent East, where the Parthians had captured the legions. After a year of negotiations, Tiberius led the army into Armenia and wanted to establish it as a Roman client-state, thus ending the threat to the Roman-Parthian border.

Tiberius reached a compromise, securing the border and letting Armenia become a neutral territory. During this time he married Vipsania Agrippina and was appointed to the position of praetor. He joined his brother in the West and 13 BC, upon returning to Rome he was appointed as consul and his son was born.

In 11 BC Tiberius divorced Vipsania and married Julia the Elder, who was Augustus’ daughter and widow of Vipsania’s father. Augustus continued to elevate Tiberius in the political world, and after the death of general Agrippa and Drusus, Tiberius seemed like a definite candidate for succession. In 12 BC he received military commissions in Pannonia and Germania. In 7 BC, Tiberius returned to Rome and became consul for the second time. The following year he was granted the tribunician power and control in the East.

Although majorly successful, Tiberius was not happy about his position. He suddenly announced his withdrawal from politics and retired to Rhodes. One of the reasons for his retirement to Rhodes was also the hatred between him and his wife Julia and his longing for Vipsania. This was disastrous for Augustus succession plans, who was already 57 years old.

After his departure, it was reported that Tiberius regretted his decision, but Augustus didn’t allow him to return. In 2AD, however, he was allowed to come back to Rome as a private citizen. At this time Augustus had no other possible heir, and he had to turn to Tiberius. He was adopted as the son of Augustus, and the succession now rested on him. With this, Tiberius received tribunician power and also the heritage of Augustus maius imperium. Augustus died in 14 AD when he was 75 years old, and Tiberius was confirmed as his successor.

Upon becoming the Emperor, Tiberius started to cite that he did not want to act as Princeps and asked only for a section of the state. He finally accepted his power, but still declined the emblem of the Princeps, the Civic Crown and did not bear the titles Pater Patriae or Imperator. His actions set the tone for his rule, and it seemed like Tiberius wanted the Senate to act on its own.

The legions in Germania started to rebel since Tiberius didn’t pay the promised bonuses. Tiberius’ son and his nephew Germanicus managed to keep the peace and defeat the rebels and returned to Rome as a hero. Germanicus celebrated his triumph in 17AD and became increasingly popular with the Romans.

In 18 AD Germanicus was granted the control over eastern part of the empire and became a clear successor to Tiberius. Unfortunately, Germanicus died the following year. Tiberius seemed to be tired of his role and in 22 AD shared the authority with his son Drusus. In 23 AD Drusus died in a mysterious way and 26 AD, Tiberius retired from Rome to Capri island.

While Tiberius began to withdraw from Rome, his ally Lucius Aelius Sejanus, who had served the imperial family for many years, started to take more responsibilities. When Drusus died, Sejanus role got even stronger. After Tiberius left to Capri, Sejanus was left in charge for the entire state. Since he was not a direct successor, Sejanus asked to marry Tiberius niece Livilla. She died in 29 AD, which made things harder for Sejanus. He started to purge trials of Senators and exiled Germanicus widow and her two older sons, who later died.

In 31 AD, Sejanus held the consulship and attempted to get rid of all people who were tied to the Julians. He was also plotting to overthrow Tiberius. In response, Sejanus was summoned to a meeting with Senate and condemned to immediate execution. Naevius Sutorius Macro took his place.

After the treason of Sejanus, Tiberius image and reputation was permanently damaged. His withdrawal from Rome was permanent, and the empire continued to run under the rules previously set by Augustus. Since the Julians and their supporters had fallen to Sejanus, and Tiberius’ immediate sons were dead, the successor candidates were limited. It was either Caligula, the son of Germanicus or Tiberius grandson Tiberius Gemellus.

Tiberius died in 37 AD when he was seventy-eight years old. After his death, Caligula and Tiberius Gemellus had joint power. After becoming the Princeps, Caligula’s first act was to have Gemellus executed. Caligula later spent all of Tiberius fortune and began the chain of events which led to the downfall of the Julio-Claudian dynasty.