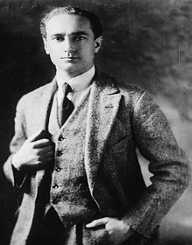 Sidney Reilly was a secret agent for the British, more famously known as Ace of Spies.

Sidney Reilly was born Shlomo (some say Salomon) ben Hersh Rozenblum; his birthdate was 24 March 1873. He was rumored to be born in Benzin of Russian Poland that time. Sidney Reilly parents were Hersh Yakov Rozenblum and Paulina Bramson, he had two sisters. Other sources claimed his name was Sigmund or Georgi, no one was sure. Many historians agreed that he was raised in Odessa, and arrived in England via France around 1895.

Not much is known about his life before his spy work, though there were records of him joining the Chemical Society and the Institute of Chemistry.

Shlomo first met William Melville, where his multi-lingual skill was put into use for the Special Branch of British Police. Shlomo changed his name on the passport to Sidney George Reilly after his first marriage to Margaret Thomas, with the help of William in 1989. Under the new passport, Sidney took his wife to the Far East, via Czarist Russia. While Margaret lived in St. Petersburg, Sidney Reilly was off spying for the British government. Sidney Reilly accumulated information about the oil deposit around the Caucasus and compiled a resource prospectus. From there, Sidney took his wife to the Far East from Egypt around 1901.

In 1904, Sidney Reilly was sent by the Board of the Admiralty to befriend William Knox D’Arcy. Sidney was to woo the founder of Anglo- Persian Oil Company to sell oil rights to the British, rather than the French. It was said that Sidney Reilly was disguised as a priest on board the French’s de Rothschild's yacht in the French Riviera, and succeeded in getting William D’Arcy to sign the rights to the British. In 1909, British Secret Service Bureau was founded with William Melville at the helm. Sidney was reported to have helped British Secret Service to steal weapon plans from the Germans. In 1917, he joined the Canadian Royal Flying Corps to obtain a military commission; there he was made a lieutenant. He advised doing so by Norman Thwaites, British intelligence in New York.

In 1918, Sidney Reilly was employed at the Queen’s Secret Intelligence Service. His ammunition trade was doing poorly, as Russians were experiencing a revolution, and the Germans were no longer buying since America went to war. Sidney Reilly first case was called the Lockhart plot, a ploy to overthrow the Bolshevik Government by murdering the Cheka. The plot failed, and Sidney fled back to London via Helsinki and Stockholm.

The Bolshevik government sentenced him to death in absentia; he was to be shot on sight on Soviet soil. Sidney was formally fired from SIS in 1921, owing to his tendency to act alone.

Sidney Reilly was awarded the Military Cross on 22 January 1919, during his time with the Canadian Royal Flying Corps for his service in the field.

Sidney Reilly was lured into Russia by uncovering OGPU, the intelligence branch of the Cheka. Sidney was told that he was meeting with the Trust, an anti-communist organization in Russia. On arrival, he was captured and was shot when he tried to escape via the Finnish border. Sidney Reilly was shot dead on 5 November 1925.

Sidney Reilly was married four times but was never divorced.

Sidney Reilly story was the inspiration behind Ian Fleming’s James Bond series. In 1983, Reilly, Ace of Spies was aired as a miniseries. Ethel Lilian Voynich.wrote the Gadfly, which was reported to be based on Sidney Reilly early life, a fact refuted by some.