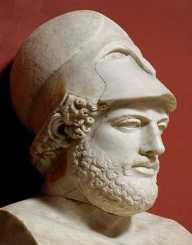 Pericles was an ancient Greek Statesman, orator and leader of Athens during the Golden Age. He was a noble leader and was responsible for the organisation of Pantheon as well as the development of democracy of majority rule.

Pericles was born in Athens, Greece in the year 494 BC. He was born to the politician, Xanthippus, a commander of the Athenian army. His mother, Agariste was a member of the influential family of Alcmaemidae. It was told that his mother dreamed of giving birth to a lion before his birth. While some interpreted this as a sign of greatness, others attributed it to the unusually large size of his head.

Pericles was of the tribe of Acamantis. His family's influence allowed him to pursue education and he enjoyed the company of the philosophers at that time which included Protagoras, Zeno of Elea and Anaxagoras, who had a very significant influence on him. He also learnt music from masters such as Damon or Pythocleides. His oratory, manner of thought and calm carriage are said to be as a result of the influence of Anaxagoras.

In his youth, Pericles avoided public appearances and occasions. He did his best to keep a low profile during these years, preserving himself as a model for his fellow Athenians. He reserved himself for great occasions and places. Some said he feared facing people due to him having features of the tyrant, Peisistratus, and thus sought to protect himself. His presentation of 'The Persians of Aeschylus' as liturgy in 472 BC showcased him as a man of great oratory and one of the wealthier men in Athens.

According to Plutarch, Pericles stood first among the Athenians for 40 years, so this must have meant that he had been in a leadership position by 460 BC. By 463 BC, he was the leading prosecutor of Cimon, the leader of the Conservative faction accused of neglecting the most important interests of Athens.

When Aristides died, and Thermosticles was in banishment, while Cimon was kept abroad by his campaigns, Pericles decided to venture fully into politics, devoting himself to the people, fighting the cause of the multitude of poor people. However, he offered himself only to great emergencies, choosing which occasions to attend and when to make speeches. He sent his propositions to the parliament through his partisans.

Ephialtes was the greatest of his public speakers. Together, Pericles and Ephialtes instigated a vote in the popular assembly that resulted in the total loss of power for the old noble council, Areopagus. This led to the exile of Cimon, who supported the maintenance of friendly relations with Sparta. Most historians see this act as the very beginning of Athenian Democracy. He became the ruler of Athens in 461 BC and held the position till his death.

That period, between 460 to 429 BC is regarded as the Age of Pericles. He set up many democratic institutions over the course of his rule and led Athens to several battles, some ending in success and others in failure. Notable among these battles are the Recapture of Delphi from the Spartans, the Athenian Navy's Siege on Samos in the course of the Samian war and ultimately, the unfortunate Invasion of Megara in 431 BC which led to Athen's defeat and ruin.

Pericles got married to one of his closest relatives, who bore him two sons, Paralus and Xanthippus. He divorced her in the year 445 BC, offering her another husband, with the agreement of her male relatives. After the divorce, he proceeded to have a long-term relationship with Aspasia of Miletus, who bore him a son, Pericles the Younger. This action was objected to by Pericles' legitimate sons, with Xanthippus slandering his father in public. Pericles did all in his power to protect Aspasia, even when she was accused of corrupting Athens.

Pericles lost his sister and sons, Xanthippus and Paralus, who died from an epidemic breakout. He was very much unconsolable during this period, even with Aspasia by his side. His half Athenian son, Pericles the Younger was granted legal citizenship of Athens and Legitimate heir of Pericles. This was following a change to the law proposed by Pericles, that confined Athenian citizenship to children whose parents were of Athenian citizens from both sides.

Pericles died of the plague that killed his sons in 429 BC. His death was mourned greatly by Athenians who felt that there would be none like him again.