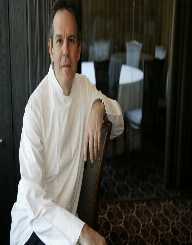 American chef and author Thomas Keller was born on October 14, 1955, in Camp Pendleton, California. His mother was a restaurateur. His parents divorced when Thomas was a young boy, and the family moved to Palm Beach, Florida. He began cooking at a young age since his mother employed him whenever her cook got sick.

While working in Rhode Island, Thomas Keller was discovered by the French master chef Roland Henin. He was then tasked to cook staff meals at the famous The Dunes Club, where Henin was working. He took Keller under his wing and taught him the fundamentals of classical French cooking. After leaving The Dunes Club, Keller worked in several positions in Florida, until becoming the cook at a small restaurant La Rive in the Hudson River valley in Catskill, New York. Since he was the only cook at the restaurant, Keller was given complete freedom to experiment with the menu. He built a small smokehouse to cure meats and developed good relationships with local livestock purveyors.

While working at La Rive, Keller was often visited by his mentor Henin, who taught him how to cook entrails and offal. Keller wanted to boy La Rive from its owners, but could not afford it. After three years working at the restaurant, he decided to leave for New York and then to Paris.

After moving to Paris, Thomas Keller began apprenticeships in several Michelin-starred restaurants. In 1984, he moved back to America and was hired as the head chef at La Reserve in New York. In 1987, he left La Reserve to open his restaurant, Rakel. Upon its opening, Rakel earned two-star review from The New York Times. The restaurant earned major popularity catering to the Wall Street executives. After the stock market bottomed at the end of the 1980s, Keller left the restaurant, since he did not want to transform his cooking to simple bistro type of restaurant.
After leaving Rakel, Keller continued to work as a chef for various positions in New York and Los Angeles.

In 1992, Keller came upon an old French steam laundry in Yountville, California. The place was converted into a restaurant. Keller was smitten by the idea and spent the next 19 months raising $1.2 million from various investors to purchase it. He reopened the restaurant in 1994, calling it the French Laundry. Over the years, French Laundry earned several awards, including James Beard Foundation award, the Mobil Guide five stars and the Michelin guide three stars.

In 2006, Keller opened yet another restaurant in Yountville, named “ad hoc.” The concept of the restaurant was different from Keller’s other restaurants, serving fixed price comfort food in family style. Before the opening of The French Laundry, Keller started an olive oil company EVO, Inc. He has also started to market a line of signature white Limoges porcelain dinnerware. Keller is the president of the Bocuse d’Or U.S. team.

In 1999, Keller made his debut as a writer and published The French Laundry Cookbook. The book won three International Association of Culinary Professionals awards for Cookbook of the Year, Julia Child “First Cookbook” Award and Design Award. After the success of his first book, Keller published The Bouchon Cookbook. He has written several other cookbooks, including Under Pressure: Cooking Sous Vide and Ad Hoc at Home.

Keller was also working on the film Spanglish, where he taught Adam Sandler to cook the “world’s greatest sandwich”- a BLT sandwich with the addition of a fried egg. He was also a consultant on the 2007 Pixar movie Ratatouille, allowing the producer to intern in the French Laundry kitchen.

Throughout his career, Keller has received numerous awards and honors. In 2001, The TIME Magazine named him America’s Best Chef. In 2003 and 2004, The French Laundry was named the Best Restaurant in the World by the Restaurant Magazine’s Top 50 Restaurants of the World. The French Laundry and Per Se held three Michelin stars, while Bouchon -one, until 2015. Keller has also received the Lifetime Achievement Awards from Restaurant Magazine and was inducted into the Culinary Hall of Fame.