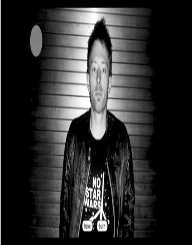 Right from his childhood life, Thom Yorke still possesses his versatile nature. He is a Libra sign who is best known as a great songwriter, vocalist, pianist, and guitarist of Radiohead rock band. He is also a guru when it comes to drums and bass guitar. He rose to fame when he released his first album titled The Eraser. Thom is also a leading singer of Atoms of Peace. This gave him a chance to be recognized in notarial bands such as Rolling Stones. Yorke stands in the category of the strongest men. He was born with a sight impairment that caused to undergo to over five surgeries. Luckily he managed to restore his eyesight, and everything went back to normal. The ailment increased his spirit that made him have a noble heart. Today, Thom makes a perfect humanitarian and environmentalist.

Thomas Edward was born on October 7, 1968, in England, United Kingdom. He learned how to play guitar at seven years old. By the age of ten, Thomas had already founded his musical band. He joined Abington School for Boys. It is here that he met Ed O’ Brien and Colin Greenwood. The three teamed up and formed a band called Friday. Thom became a leading singer and songwriter. However, they parted ways after some time, but they then reunited and recorded various songs.

The Friday band released their first song titled Manic Hedgehog that brought positive reviews. The EMI, a recording company, heard the song where they signed six albums deal in 1991. They changed the name of their band to Radiohead. With the help of EMI, Thom and his team produced an album titled Creep. They followed it up with The Bends album that received positive acclaims as well as topping the 500 Greatest

Albums Of An All-Time category.

In 1997 they launched OK Computer Album which cemented into fame. It became the number one hit in the UK charts. With a never give up soul, they released Hail to the Thief album in 2003 and the Rainbows in 2007. Thier contract with EMI expired in the middle where they went to work on different projects in the mid of 2009.It is here that he worked with Red Hot Chili Peppers and a Radiohead Producer Niger Godrich.

Thom Yorke major works included The Erase song that climbed to number three in the UK Album Chart. It was also ranked number two in the US where he sold over a million copies in one weeks’ time. The song was nominated for Grammy Awards as well as Mercury Music Prize in 2007.

Thom Yorke still lives in his native land in Oxfordshire with his partner Rachel Owen. They have two children: Agnes and Noah. Thom is a fervent environmentalist. He currently supports the Earth’s climate change campaign called The Big Ask.