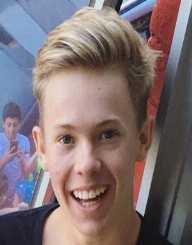 Tanner Fox is an American Professional Stunt Scooter Rider and YouTube star born on December 22nd, 1999. His youtube channel currently has over five million subscribers. He created the channel in September 2011 and initially named it MTflims and later renamed it as self-titled. Since then he has never stopped uploading his videos. He is also a great celeb on Instagram with around 2.3 million followers.

He featured in "BMX vs. SCOOTER" Video along with Harry Main. His initial uploads were random videos of him conducting his day to day activities. Before he knew it, he was a star. However, these random uploads not only gained him fame but also once got him into trouble in school.

He was expelled from a private Catholic school where he was studying after he was found taking videos during class time. He was only eleven years old at the time. But what makes Tanner Fox even more famous is his scooter riding profession. His name is rated among the top stars of the sport. His fans are always eagerly waiting for his next uploads.

Tanner Fox was born on December 22nd, 1999. His place of birth was California in the United States. He has a sister called Lindsay. Tanner Fox was only two years old when he began skateboarding. He created his youtube channel where he initially uploaded random videos of himself skateboarding with his friend Jake Angeles. He has always been homeschooled, but every two days in a week he attends a charter school.

Tanner Fox has millions of followers currently. His freestyle scooter riding has put his name at among the top position of the famous individual in the game. The channel which he randomly uploaded his videos turned out to be the channel to his fame. He posts these videos almost daily.

In September 2011, Tanner Fox created his channel self-titled which was initially named MT films. He then began uploading his videos. The channel was deemed the fastest growing on August 6th, 2016. This can be attributed to the fact that his channel is diversified. Apart from his random video uploads; the channel also has prank videos. It also has stunt videos along with other Vlogs. With these varieties, Viewers can never resist the urge of tuning in over and over. He has climbed the ladder of success with his association with other stars like Root Industries and Lucky Scooters.

His favorite scooter trick is flairs. His greatest uploads during his career is BMX vs. SCOOTER. Tanner Fox featured in the video with Harry Main. He later also collaborated with Roman Atwood. He was even lucky to be behind the wheels of his GTR car. He has since then been associated with others like Casey Neistat a, Justin Stuart and Carson Lueders.

Towards the falloff 2016, his channel had more than four hundred million views and more that 3.4 million subscribers.

Tanner Fox met Taylor Alesia in 2017, and the two have been dating for a while. Initially, rumors had it that he once dated Anna whom they went to school together. He loves pets especially dogs. He has named his dog Kirby Fox and created an Instagram account for her. During his free time, he loves to spend time with his friends and family. His best friend is Jake Angeles. They love to skateboard together. He lives a life just like any other teenager his age.