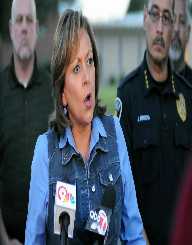 Susana Martinez is an American Republican politician currently serving as the 31st Governor of New Mexico. Born on July 14, 1959, she is the first woman to serve as the governor of New Mexico. Susana Martinez was officially sworn into office on January 1, 2011, after successfully winning an election on November 2, 2010. This also makes her the first Hispanic woman governor in the United States. She has served in various capacities including serving three terms as the district attorney for the3rdJudicial District in Dona Ana County from 1997 to 2011 and chairperson of the Republican Governors Association. After her first term of office, she was re-elected in a landslide victory against state Attorney General Gary King.

Susana Martinez was born on July 14, 1959, in El Paso, Texas to Jacobo "Jake" Martinez and Paula Aguirre. Her father was a boxer for the United States Marines during the Korean War and a three-time Golden Gloves title winner. Jacobo also became a deputy sheriff for El Paso County. Born into a family of Mexican descent, Martinez has two siblings, a sister Lettie, and a brother. Lettie developmentally disabled as she suffers from cerebral palsy, hence Martinez is currently her legal guardian. Martinez received education at Riverside High School in El Paso, serving as the president of the student body. She graduated in 1977 and enrolled at the University of Texas at El Paso. She graduated with a bachelor’s degree in criminal justice. She then did her J.D degree at the University of Oklahoma College of Law in 1981 and graduated in 1986.

After her graduation in 1986, she served in Dona Ana County, New Mexico, as an Assistant District Attorney for the 3rd Judicial District until 1992. Working in that capacity, she became known for working with sexually abused children and other domestic violence and sexual abuse offenses. With her hard work and dedication the district attorney, Doug Driggers promoted her to Deputy District Attorney. After Driggers was unsuccessful in his third term bid as a District Attorney losing to Gregory Valdez, Martinez was fired with claims she missed key timelines in a case. She, therefore, sued Valdez for wrongful termination. The case was settled out of court, and she was awarded $100,000 to $120,000 compensation.

In 1996, Susana Martinez was elected as the district attorney in the3rd Judicial District by receiving almost 60% of the votes to beat Valdez. She would serve three consecutive terms until 2011. During her term as district attorney, Martinez was much dedicated to cases involving child abuse and public corruption. She successfully ensured the passage of a law to expand Katie’s Law to "require a DNA sample for all felony arrests." The expansion became law in April 2011.

On June 1, 2010, Susana Martinez became the Republican nominee for the governorship of New Mexico after receiving 51% of votes in a five-way contest in the primary election. Other contestants were Doug Turner, former Republican Party state chairman, Allen Weh, State Representative Janice Arnold-Jones, and Pete Domenici, Jr. On November 2, 2010, she defeated the then lieutenant governor of New Mexico, Diane Denish in the general election. She won by 53% receiving 321,219 votes to Denish's 280,614 votes. She was sworn into office on January 1, 2011. This made her the first female governor of New Mexico and the first female His panic governor in the United States.

She was re-elected into office on November 4, 2014, in a landslide victory over her competitor state Attorney General Gary King. She received 57% of the votes to 37% by King.

Immediately after taking office, she took steps to freeze the purchase of state vehicles until 2012 and prevented state agencies from hiring a former lobbyist. Another major step was signing an executive order to withdraw the sanctuary status for illegal immigrants who commit crimes in New Mexico on January 31, 2011. Prior to the 2012 US presidential election, there were speculations that Susana Martinez would be the vice presidential nominee on the Republican ticket.

However, she refuted the claims and indicated that she would not run. She vetoed the increment of the state’s minimum wage with reasons that it was higher than other neighboring states. Job losses in New Mexico have been on the rise since 2014 as compared to previous years. According to the state’s Department of Workforce Solutions, there was about 4,400 net job loss as of April 2014.

Susana Martinez has married twice. He current husband is Chuck Franco whom he met in Las Cruces while both were working as law enforcers. She has a stepson called Carlo. Martinez met his first husband in Norman, Oklahoma while in law school. They divorced in the mid-1980s.

Martinez was awarded the Prosecutor of the Year by State Bar of New Mexico in 2010. In 2013, she was named in the list of 100 most influential people in the world by the Times magazine.