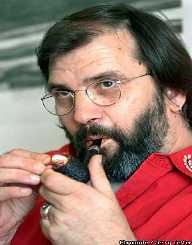 Stephen Fain Earle best known as Steve Earle is an American country, rock and folk singer, and songwriter. Born on January 17, 1955, he is also a record producer, actor, and author. Steve Earle started a career as a songwriter in Nashville leading to the release of his debut Extended Play in1982. It was not until 1986 that Steve Earle came out with his breakthrough album Guitar Town and had since then released 15 studio albums. Earle has won three Grammy Awards for his music career. Aside from music, Steve Earle has played roles in several films and television production. He has also written books of short stories, play, and novel.

Steve Earle was born on January 17, 1955, in Fort Monroe, Virginia in the United States of America to Jack Earle, an air traffic controller. At age two, he the family moved to Texas and continued moving from one place to the other. Nonetheless, Steve Earle grew up in San Antonio area. At age 11, he started learning guitar and at age 13, contested in school talent competitions.

At age 14, there was a report that he left home to follow his idol, singer, and songwriter, Townes Van Zandt in a tour in Texas. Steve Earle dropped out of school at age 16 and termed as rebellious at that age. He later moved with his 19-year old uncle, also a musician to Houston. While there, he was able to meet Van Zandt who became his role model and hero. His sister, Stacey Earle is also a musician and songwriter.

In 1974, Steve Earle started picking odd jobs and also playing music at night while in Nashville, Tennessee. He wrote and played bass guitar in Guy Clark’s band and was on Clark’s album, Old No.1 in 1975. That same year, he along with Townes Van Zandt, Guy Clark, Rodney Crowell and Davis Allan Coe, was cast in the film, Heartworn Highways, a documentary on the Nashville music scene. Living in Nashville, Steve Earle became a staff songwriter at the publishing company Sunbury Dunbar. Earl later left Nashville for Texas to form the band The Dukes. Spending some few years in Texas, he returned to Nashville in the 1980s, where he worked as a songwriter for the publishers Roy Dea and Pat Carter.

In 1982, Steve Earle released the EP, Pink & Black, which featured the Dukes. During this period, John Lomax acted as the manager of Earle and therefore sent to EP to Epic Records, gaining him a recording contract with the label in1983. That same year he signed a record deal with CBS and came out with the neo-rockabilly album. Roy Dea and Pat Carter later founded an independent record label, LSI, on which Earle started to record his music. In 1985, Connie Smith recorded Earle’s A Far Cry from You, a song that gained a minor position on the country chart. Steve Earle lost his publishing contract with Dea and Carter and also left Epic Records and cut his ties with his manager, Lomax.

He later met producer Tony Brown and gained a seven-record deal with MCA Records. This led to the release of his debut full-length album, Guitar Town, in 1986, on MCA Records. He followed it with a compilation of his earlier recordings titled, Early Tracks, and the album, Exit 0, with Dukes. The album was highly acclaimed as it was a blend of rock and country.  In 1989, he released Copperhead Road on Uni Records. This was followed by The Hard Way in 1990 and the live album, Shut Up and Die Like an Aviator.

Steve Earle since fell into the use of drugs and that caused him the contract with MCA Records as it was not renewed after it expired. After his years of hiatus, he released Train a Comin on Winter Harvest Record, which gained a Grammy Award nomination for Best Contemporary Folk Album in 1996. Steve Earle then came up with his record label, E-Square Records in 1996 and followed it with the album, I Feel Alright, which is a combination of country sounds, rock, and rockabilly. The following year, he released El Corazon (The Heart).

Steve Earle was not only focused on music but also writing. During the New York Festival in 2000, he presented except his poetry and fiction writing. The following year, he published the short stories, Doghouse Roses and the novel I’ll Never Get Out of This World Alive. Steve Earle then wrote and produced the off-Broadway play in the death of Karla Faye Tucker. Karla became the first woman to be executed after the death penalty was reintroduced in Texas. Steve Earle also expressed this sentiment in his album Jerusalem, which talks about his anti-death penalty, anti-war and leftist views.

Steve Earle released the album The Revolution Starts Now in 2004, which was influenced by the Iraqi War and President George W. Bush administration policies. The album won the best contemporary folk album at the Grammy. From 2004 to 2007, Steve Earle worked for Air America as a radio show host. He also served a host of the show, Hardcore Troubadour on Outlaw Country channel. Coming out with several albums, Earle’s twelfth album, Washington Square Serenade was released on New West Records in 2007.

Steve Earle came out with a tribute album, Townes on the New West Records on May 12, 2009. The album, which had 15 songs, won him his third Grammy award for the best contemporary folk album. His fourteenth studio album and the novel all titled I’ll Never Get Out of The World Alive was released in 2011. His most recent album was Terraplane released on February 17, 2015.

Steve Earle had married seven times first to Sandra Henderson in Houston when he was 18 years. She left her a year later and moved to Nashville where he married Cynthia Dunn, his second wife. His third marriage was to Carol-Ann Hunter and had a son, singer, and songwriter, Justin Townes Earle. They later divorced, and Earle married Lou-Ann Gill, who he also had a child with.

Steve Earle married his fifth wife Teresa Ensenat and later remarried Lou-Ann Gill. He married singer-songwriter, Allison Moorer and had a son, John Henry Earle in 2005. The couple divorced in 2014. Steve Earle has been at the wrong side of the law on several occasions first in 1993 when he was arrested for the possession of heroin.

In 1994, Steve Earle was also charged with the possession of cocaine and weapons and was sentenced to a year in prison. He was, however, released after serving 60 days of his sentence. To treat his drug addiction, he went under an outpatient drug treatment program at the Cedarwood Center in Hendersonville, Tennessee.