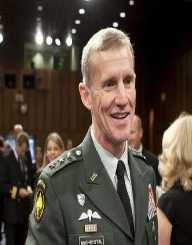 Stanley Allen McChrystal was born on August 14, 1954, in Fort Leavenworth, Kansas, U.S. He is a former United States Army general who led the Joint Special Operations Command during the Persian Gulf Wars in Iraq. He has also served as Director, Joint Staff and Commander of JSOC. After his resignation, he was replaced by David Petraeus. He has served at Yale University teaching courses in international relations since 2010.

Stanley Allen McChrystal was born on August 14, 1954, in Fort Leavenworth, Kansas, the U.S. He attended St. John's College and after his graduation proceeded to the United States Military Academy at West Point, New York. After his graduation in 1976, he began serving as the second lieutenant in the United States Army. He was the weapons platoon leader until 1978 and later served in the capacity of rifle platoon leader beginning February 1978 to July 1978.

He also served as executive officer from July 1978 to November 1978. In 1978, he enrolled at Special Forces School to train as a special force officer. After graduation, he still served at Fort Bragg as commander of Operational Detachment. From June 1980 to February 1981, he enrolled for the Infantry Officer Advanced Course at the Infantry School at Fort Benning, Georgia.

Stanley McChrystal was sent to South Korea in 1981 as intelligence and operations officer under the United States Nations Support Group. After serving in different battalions within the Army, he went to Naval War College in Newport, Rhode Island. He undertook the Command and General Staff Course and completed in June 1990. Beginning April 1993 to November 1994, he was the commander of the second battalion 504th Parachute Infantry Regiment, 82nd Airborne Division. From November 1994 to June 1996 he commanded 2nd Battalion, 75th Ranger Regiment.  He took full command of the entire 75th Ranger Regiment from 1997 to 1999.

He served as the Commanding General, Joint Special Operations Command, from September 2003 to February 2006. On October 6, 2003, he was appointed to command in which he succeeded in capturing Saddam Hussein in 2003. He was also on the forefront when the leader of Al-Qaeda  Abu Musab al-Zarqawi was murdered in Iraq. In May 2009, he was given a role as top commander in Afghanistan and replaced General David McKiernan.

In June 2010, the Rolling Magazine published the controversial statements made by Stanley McChrystal about the White House and President Obama. Stating of how disappointed he was by the leadership of the White House and that some of its leaders acted like ‘Clowns.’ He was summoned to hold talks with the president, and at the meeting, he submitted his resignation. He was replaced by General David Petraeus whom the President appointed on June 23, 2010.

Stanley McChrystal married Annie Corcoran in 1977 and together with Annie have one child. His father Herbert Joseph McChrystal, Jr. served as a Major General in the U.S Army. He has five siblings who have either served in the Army or have military partners.  He is currently sixty four years old.