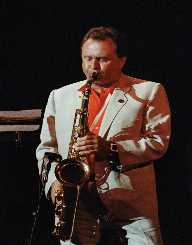 Stan Getz was a famous American Jazz saxophonist and he made bossa nova sound popular. He performed with jazz celebrity Woody Herman. He was attracted by the style of his hero Lester Young and he followed that tone. Getz was popularly known as “The Sound”. His record “The Girl from Ipanema” was highly appreciated by the public. Critic Scott Yanow considered Getz as one of the greatest saxophonists to have lived on this earth. He was ably guided by Antonio Carlos Jobim and Joao Gilberto.

Getz was adept in genres such as Cool Jazz, Bossa nova, and Bebop. He had an active music life from 1943 to 1991. Childhood Stanley Gayetzky was born on February 2, 1927, in Philadelphia. Alexander Getz and Goldie Getz were his parents. The family shifted to New York from Philadelphia during depression in search of better prospects. He was a diligent student and was excellent in his studies. Getz was a keen student of music and when his father gifted him with a saxophone at the age of 13, he was instantly attracted to the instrument.

Getz was a student of James Monroe High School in the Bronx. All City High School Orchestra of New York City gave him admission in 1941. He got private and free tuitions from Simon Kovar of New York Philharmonic. His attempts to drop out of school were unsuccessful because of the school authorities. Getz joined the Jack Teagarden’s band in 1943 at the age of 16. He had the chance to play with Lionel Hampton and Nat King Cole. He played in Woody Herman’s band “The Second Herd” from 1947 to 1949. He was one of “The Four Brothers” in the band. Other saxophonists of the band were Herbie Steward, Zoot Sims, and Serge Chaloff. With Herman, Getz featured in the popular record “Early Autumn”. His solo career started after his departure from the band.

In 1952, Getz featured in the year’s top jazz album “Moonlight in Vermont of Johnny Smith” and this was a big boost to his standing. In the 1950s he worked from Scandinavia and was famous for his cool jazz. He also was part of quintets and a sextet which had famous artists. Getz returned to the U.S in 1961 and became popular after his introduction of bossa nova music to American listeners. Getz came out with a famous album “Jazz Samba” along with guitarist Charlie Byrd in 1962. Getz along with composer Gary McFarland produced “Big Band Bossa Nova”, his second album in 1962. The album “Getz/Gilberto” was recorded in 1963 along with Antonio Gilberto and his wife Astrud. They also produced live albums “Getz/ Gilberto Vol. 2” and “Getz Au Go Go” in 1964. The jazz album “Nobody Else but Me” was recorded in 1964 but was released by Verve Records after 30 years after the demise of Getz. Getz tried his hand at fusion in 1972 and had a record to his credit. He also tried Echoplex on his saxophone.

He played a small role in the film, The “Exterminator” in 1980. During 1980s, Getz taught students in Jazz Workshop of Stanford University till 1988. Getz along with Huey Lewis and the News recorded the album, “Small World” in 1988. Getz had the distinction of playing with reputed jazz players like Benny Goodman, Oscar Peterson, and Jimmy Dorsey.

Getz was awarded Grammy for Best Jazz Performance for “Desafinado” from the album Jazz Samba in 1963. He was awarded a gold disc as the album had a sale of more than a million. The famous Latin Jazz track, “The Girl from Ipanema” recorded with Gilberto got a Grammy award in 1963. Getz and Gilberto won two Grammys for Best Album and Best Single. Getz got a second gold disc for his bossa nova album “Jazz Samba Encore!” with the distinguished Brazilian guitarist Luiz Bonfa in 1964. Getz was initiated into the Down Beat Jazz Hall of Fame in 1986.

Stan Getz married Beverly Byrne on November 7, 1946, in Los Angeles. Beverly was a vocalist with the Gene Krupa band. The couple had three children. They separated in 1956. Getz married Monica Silfverskiold, daughter of Olympic medallist Nils Silfverskiold, on November 3, 1956. They had two children, Pamela and Nicolaus. They were residents of Copenhagen, Denmark. The marriage had its own set of problems.

Getz was addicted to drugs and alcohol during his teenage. When he tried to break into a pharmacy to get drugs, he was arrested and sent to jail, in 1954. He was offensive towards his family members because of his consumption of drugs.

Getz was suffering from lever cancer and the end came on June 6, 1991, in Malibu, California, the U.S. His grandson Chris consecrated his ashes to the ocean by pouring the ashes out of his saxophone case in California.