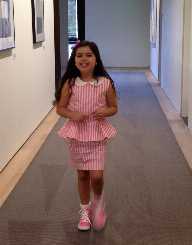 Sophia Grace Brownlee is an English child star who rose to notice when she appeared in a YouTube singing video with her cousin Rosie.

The cousins served as correspondents at the Grammy Awards, The MTV Music Awards and others. Their work with The Ellen DeGeneres Show won Brownlee and her cousin the Choice Webstar Award at 2012 Teen Choice Awards. Brownlee has built on her success and released recordings of other songs. She released Girls Just Gotta Have Fun on her YouTube channel, the song and video also featured her cousin Rosie McClelland.

Her second single, Best Friends, was also released on her YouTube channel and made it into the Billboard Hot 100 music charts. The video for the song Best Friends did not feature Rosie McClelland. She was signed to the Capital Records France label in 2016 and released a third single, Girl in the Mirror. Girl in the Mirror featured the American artist, Silentó, who became famous for their début release, Watch Me (Whip/NaeNae). The single was released for download on iTunes.

Brownlee has also appeared in the Nickelodeon TV series Sam & Cat with her cousin Rosie McClelland. The show starred Ariana Grande, and Brownlee and McClelland appeared in two episodes of the show, the pair were termed the Brit Brats in the show. Brownlee also made a straight to DVD film with her cousin titled, Sophia Grace & Rosie's Royal Adventure. It was announced in 2013 that Brownlee would appear in a remake of Little Red Riding Hood, but Disney never confirmed this and the part was eventually played, byLilla Crawford.