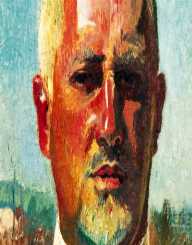 Cuno Amiet was born on March 28, 1868. He was an artist, painter, illustrator, and sculptor. He is known as the pioneer of modern art. He created more than four thousand paintings.

Cuno Amiet was born on March 28, 1868, in Switzerland. He was born to J. J Amiet who was a local historian and archivist and his wife. He attended Kantonsschule Solothurn. He graduated from the school with a matura. He later joined the Academy of Fine Arts in Munich where he pursued further studies. At the academy, he met Giovanni Giacometti who became his lifetime friend. In 1889, he and Giacometti went to Paris where they took a transfer to Academie Julian, Paris. In 1892, he transferred to Pont Aven, Brittany.

Cuno Amiet stayed in Breton where he met many painters and also encountered the work created by Ganguin Circle. He became attracted to the art of painting. He learnt a lot from artists such as Roderic O'Connor and Armand Seguin among other artists. In 1893, he returned to Switzerland where he set up his studio. His paintings were admired by many people. He was later drawn to Ferdinand Hodler whom he copied his styles. At exhibitions that were held at the Vienna Secession, he was criticized as Hodler’s clone since his works resembled those of Hodler. He later shifted his attention to the French style of art.

Cuno Amiet established his own style of painting. He created most of his best painting from 1904 to 1914. In 1905, he had his exhibition at the Kunstlerhaus, Zurich. His works were observed by Kirchner and Heckel among others. He was later invited to be a part of the Bridge Exhibition organised by Kirchner among others. In 1906, his work was exhibited. He became a part of the Bridge Exhibition until its dissolution in 1913. In 1898, he moved to Oschwand. His house was a meeting point for painters, artists, writers and scholars who included Adolf Frey and Hermann Hesse among others.

Cuno Amiet received many painting orders which were both private and official. He also got orders for the Veranda of Art Museum in Zurich, wall decorations at the art museum in Bern and the gymnasium frescos, Bern. In 1919, he received an honorary doctorate from the University of Bern. He was good in oil painting and watercolour paintings and printmaking as well. He also used bronze to make sculptures. In 1931, a fire broke out in the crystal palace and burnt down fifty of his famous artworks. His brilliance, however, increased in the 1940s and the 1950s.

In 1898, Cuno Amiet married Anna Luder with whom he adopted a daughter, Lydia Thalmann. He died on June 6, 1961, of ill health in Oschwand. He died at the age of ninety three.