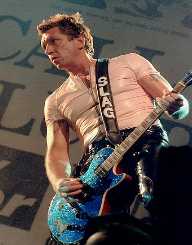 John Simon Ritchie known in music as Sid Vicious is English vocalist and bassist. Born on May 10, 1957, he was known as a member of the punk rock band called Sex Pistols who fell to drugs, had legal issues, and died of drug overdose. He gained notoriety for his violent, edgy and rebellion persona. Vicious' career with Sex Pistols began in 1977 as a replacer of Glen Matlock, who had issues with other band members. In the latter part of his career, he met Nancy Spungen, who later became his girlfriend and manager. The two fell deeply into drugs and that lead to their destruction and death.

After the disbandment of Sex Pistols, Sid Vicious lived with Spungen in Chelsea Hotel, New York.  The two addicts continued their drug usage spree that led to Spungen’s mysterious death by stabbing. Vicious was a prime suspect in the murder and was arrested but later released. He was arrested again on different charges. On February 1, 1979, he was released from prison, and his mother threw a welcome party for him. Vicious used drugs that night and was found dead of a drug overdose the next morning.

Sid Vicious was born to John and Anne Ritchie on May 10, 1957, in Lewisham. His mother joined the Royal Armed Forces after an unsuccessful academic pursuit, and his father was also a guardsman at the Buckingham Palace. He was also a semi-professional trombone player on the London Jazz scene. Ritchie and his mother moved to Ibiza shortly after birth and were expecting to be joined by his father, which never happened. After failing to show up, Anne married Christopher Beverley.

Ritchie took his stepfather’s surname to be known as John Beverley. Six months into the marriage, Christopher died of cancer. In 1968, they moved to Tunbridge Wells to live in a rented flat. While there, Vicious received education at the Sandown Court School. Three years later the mother and son left for Hackney, east London. He continued his education at the Hackney Technical College where he met John Lydon in 1973. Lydon gave Ritchie the nickname “Sid Vicious.” This was after Lydon’s pet called Sid bit Ritchie. Ritchie after the bite said "Sid is really vicious!" hence the name Sid Vicious.

John Lydon recounts he used to perform with Sid Vicious for money mostly doing covers of Alice Cooper. In 1976, he began a professional music career joining the Flowers of Romance with members like Keith Levene, Palmolive, and Viv Albertine.

In 1977, Sid Vicious was invited to join Sex Pistols as the replacement of bassist Glen Matlock. Vicious could not play bass during his recruit. His first gig with the band was at The Screen on The Green in London on April 3, 1977. With his inability to play the bass, guitarist Steve Jones had to play the bass and guitar during the first album Never Mind the Bollock, Here’s Sex Pistol. Vicious was also not present for the album because he was on admission at the hospital for hepatitis. His contribution to the group was minimal due to his heavy drug use and violent acts. The band broke apart in 1978, as members began to have issues with each other.

After Sex Pistols, Sid Vicious decided to go solo and at the time was heavily involved with Nancy Spungen. Both were addicts and heavily used drugs. Spungen became his manager as Vicious continued his solo pursuit performing with musicians like Rat Scabies of Damn, Mick Jones of the Clash, Glen Matlock, Arthur Kane, and Johnny Thunders. Most of his gigs were performed at Max’s, Kansas City.

The Murder Of Spungen

Sid Vicious and Spungen lived at the Hotel Chelsea, Manhattan, New York post Sex Pistols. Their relationship became rocky, and the use of drugs made them violent. Spungen was found dead on the bathroom floor on the morning of October 12, 1978. According to Vicious, drugs intoxicated him, and he only woke up to find Spungen dead. Spungen died from a single stab wound and believed to have bled to death. The knife used for the stabbing belonged to Vicious, and this made him the prime suspect. He was therefore arrested and charged with murder.

Vicious gave conflicting account as to what really happened that night. He said "I stabbed her, but I never meant to kill her," and later said he said he does not remember what happened and then we had an argument and Spungen fell onto the knife. On October 22, 1978, Vicious tried to commit suicide by using a broken light bulb to slit his wrist. He was then hospitalised at Bellevue Hospital and while there made another suicide attempt by trying to jump from a window. A hospital staff pulled him back.

On February 1, 1979, Vicious was released on bail from the Rikers Island prison after an assault on Todd Smith, brother of singer Patti Smith. Some group of friends, therefore, decided to welcome him with a party. The party held at a friend's Manhattan apartment at 63 Bank St. in New York City had in attendance Jerry Only and Howie Pyro and others. He was placed on a detoxification methadone programme while in prison so was clean during his release. However, upon his request, his friend, English photographer Peter Kodick, gave him heroin.

Sid Vicious died at midnight of a drug overdose. His mother found his dead body the morning of February 2, 1979. According to his friend, Eileen Polk no funeral home in New York was ready to hold a burial and funeral for Vicious due to his bad reputation. His remains were cremated, and his wish to be buried with Spungen could not be fulfilled.

Vicious and four other original members of Sex Pistols were inducted into the Rock ‘n’ Roll Hall of Fame in 2006. The band, however, refused to attend the event.