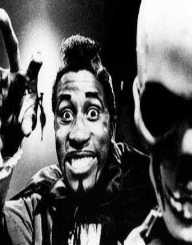 Jalacy Screamin' Jay Hawkins was a gifted American pianist, but his musical talent was overshadowed by his musical performances. His acts often involved him wearing tacky clothing with animal prints and voodoo props, accompanied by Henry, a smoking skull attached on a stick.

He died at the age of 50 on February 12, 2000, in Neuilly-sur-Seine, France after emergency surgery was performed on him due to an aneurysm.

Screamin' Jay Hawkins was a known womanizer and was in a relationship with various women in his life. He has believed to have fathered some children. In 2001, a gathering was held for all his illegitimate children at the L.A.'s House of Blues. Hawkins himself has once stated that the total number of children he fathered is 57 children.

He was married six times of which at the time of his death, his wife then was 31 years old. His last marriage was to Virginia Sabella, a woman of French origins, of which he ended up getting stabbed for in a jealous rage by Pat Newborn, his singing partner.

Born on July 18, 1929, as Jalacy Hawkins, he was a native of Cleveland, Ohio where he also spent his formative years. As a child, he picked up the piano and learned the instrument all by himself and soon enough, he could read sheet music by the age of 6.

Some claim that Hawkins spent a part of his childhood in an orphanage, claiming that his mother had one too many kids to handle, so he gave him up in the hopes of a better life.

Aside from music, Screamin' Jay Hawkins developed another interest and this time; he ventured into the world of boxing. As a young boxer, he was a formidable opponent to many and even won some games. In 1943, Hawkins came home as the victor at the Golden Gloves championship, but even though he loved the sport, he always had an unrelenting passion for music.

When the war broke out, Hawkins enlisted as part of the US Army in 1944 and provided entertainment and a source of amusement to his fellow troops by performing in various acts. After service, he returned to music and boxing of which he earned the championship title for middleweight category of boxing in Alaska on 1949.

A Flair for the Theatrics and Breakthrough

Still holding on to his dream as a musician, Screamin' Jay Hawkins persevered and held on to his musical endeavors. Although he was known for his dramatic acts on stage, he favored opera more than his signature style, even quoting that his musical inspirations were Mario Lanza and Paul Robeson.

His breakthrough hit came in the form of “I Put A Spell on You.” At the time of the recording, Hawkins and the recording team were drinking very heavily yet continued with the recording and production with the song.

Screamin' Jay Hawkins also stated that he has no memory of how the process went through but later learned the song by listening to the recording. Initially, it was supposed to be a ballad but due to the alcohol in his system, what came out was guttural, pretty much screaming and grunting at the entirety of the song.

The hit was a success although it was banned at selected radio stations, deeming it was far too sexual for the listeners. Regardless of the fact, the record company, Okeh Records, released a refined version of the song.

Soon after Screamin' Jay Hawkins was invited to perform the song of which Alan Freed, a radio DJ, offered to pay him to perform by emerging out of the coffin. Reluctantly, he obliged, but it set the image that is to become his trademark style for life.

Although several tracks and albums followed his commercial hit, such as Hong Kong, Alligator Wine, and At Last, it never came in comparison to the breakthrough track. He spent a great deal of time touring various cities from the 1960s until the 1970s, which boosted his fame throughout the world.

Aside from performing on stage, he also had a share on films, appearing on a few movies such as Mystery Train which was released in 1989 and the 1997 film Perdita Durango to name a few.