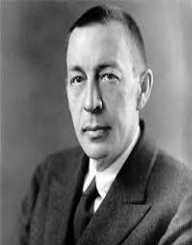 Sergei Rachmaninoff was a Russian composer and piano player.

Sergei Vasilyevich Rachmaninoff was born near Semyonovo, Russia, on April 1 (March 20 – old style), 1873. His family had aristocratic roots, and many of his relatives were involved with music. His father, Vasily, was an officer in the army. His mother, Lyubov, was the daughter of a wealthy army general. He had three brothers and two sisters.

Sergei Rachmaninoff started taking piano lessons when he was four years old. His first teacher was called Anna Ornatskaya. At the age of ten, he started taking lessons from the Saint Petersburg Conservatory.  A few years later, he transferred to the Moscow Conservatory. His most important teacher at the time was the pianist Nikolai Zverev. He graduated in 1891.

Sergei Rachmaninoff often performed with his classmates from the Moscow Observatory. In 1891, he wrote Piano Concerto No. 1, Youth Symphony, and Prince Rostislav. In 1892, he had his first solo performance. He also won the Great Gold Model for his opera Aleko, an adaptation of Pushkin’s poem The Gypsies. The next year he wrote a few songs, which were translated into German.

Rachmaninoff was depressed for the next several years. He tried to compose and to perform on stage, but he could not do a good job. He supported himself by giving piano lessons. In 1901, he finished the Piano Concerto No. 2. In 1903, he wrote the operas The Miserly Knight and Francesca da Rimini. In 1904, he became the conductor at the Bolshoi Theatre. He was not satisfied with the political situation in Russia, so he moved to Germany in 1906.

In 1917, many of Sergei Rachmaninoff's possessions were taken by the communist government. He decided to leave Russia finally. He first went on a tour across Scandinavia. He then moved to the United States. He settled in New York City, and he frequently performed all around the country. He also started working with the Victor Talking Machine Company.

Since leaving Russia, he spent most of his time performing. He did not focus on composing that much. He created a few new works for piano and orchestra.

In 1902, Sergei Rachmaninoff married Natalia Satina, his first cousin. Because they were close relatives, their marriage was criticized by the people around them and banned by the Russian Orthodox Church. They had two daughters, named Irina and Tatiana.

Rachmaninoff often suffered from depression. He was also very attached to Russian culture, and he preferred to stick to it instead of accepting different traditions.

Sergei Rachmaninoff suffered from skin cancer. He passed away on March 28, 1943. His funeral was held at the Holy Virgin Mary Russian Orthodox Church in Los Angeles. He was buried at the Kensico Cemetery in the state of New York, even though he expressed his wish for the Novodevichy Moscow Cemetery while he was still alive.