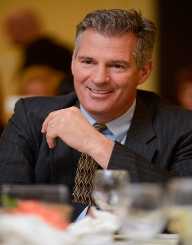 Scott Philip Brown was born 12 September 1959 in Kittery, Maine. Brown’s parents were divorced when he was one. After the divorce, his father was an unreliable presence in his life, although they did reconnect later. At first, he lived with his mother at her parents home in Wakefield, Massachusetts.

The family also had connections from colonial times to New Hampshire. Their English ancestor, Francis Matthews, having arrived in the 17th century. After the divorce of his parents, Brown lived in more than sixteen homes during his upbringing. He spent some time living with his mother’s sister and her family. His childhood was not an easy one. After his parents divorced, his hardworking mother sometimes had to resort to welfare.

When he was six years old, his stepfather beat him up one morning when his mother was in the hospital giving birth to Leeane, his stepsister. At ten, a camp counselor sexually abused him. Brown told no-one but revealed this in his autobiography Against All Odds: A Life From Hardship to Hope (2011).

Scott was a troubled young man for awhile; getting involved in shoplifting and stealing. Sometimes he stole simply to feed himself. Then he was caught in a record store with five albums down his jacket. The judge he appeared before helped Brown see that he was on the wrong track. He mended his ways, never stealing again.

Scott Brown attended Wakefield High School, graduating in 1977. At 19, he joined the National Guard in Massachusetts. He continued his education at Northwestern University and Tufts University. He graduated with a Bachelor’s degree in History (Honours).

Scott subsequently earned a Law Degree (at Boston College Law School) graduating Juris Doctor in 1985. While at college, Brown was voted Cosmopolitan’s America's Sexiest Man. This was after his appearance as a nude centerfold in the magazine. The Cosmopolitan fee and subsequent modeling jobs helped pay for his education.
For awhile he lived in New York City modeling for Wilhelmina Models before returning to his law studies.

From the late 1990s, Scott Brown worked as a lawyer in the Massachusetts legislature. A self-described social moderate, fiscal conservative, he won a special election for Senator Edward Kennedy’s seat in 2010. He styled himself as an independent thinker, and this appealed to voters, allowing a conservative to win in a traditionally Democrat stronghold. He won the seat 52-47.

Scott Brown had capitalized on the dissatisfaction of voters with politicians. His win ended fifty years of Democratic voting in Massachusetts. At the next election in 2012, he lost the seat to Elizabeth Warren, a Democrat. In 2014, Brown was the Republican nominee for New Hampshire at the 2016 election. He lost to Jeanne Shaheen who was running for re-election. Brown lost the 51-48 vote. The Boston Magazine reported that Brown had claimed voter fraud was a factor in his loss.

Brown works as a political contributor for Fox News Channel.

Scott Brown served in the US Army receiving the Army Commendation Medal. He was a member of the National Guard from 1979 until 2014. He was initially trained at Fort Dix in New Jersey while attending reserve officer training at Northeastern University.

From 1994 onwards, Scott worked in the Massachusetts Army National Guard Judge Advocate General’s Corps as a defense counsel. In 2011, he went to Afghanistan as part of his National Guard service. He was promoted to Colonel in 2012, receiving the Legion of Merit when he retired in 2014.

Scott Brown was very active in his support of veterans. As a member of the Joint Committee on Veterans and Federal Affairs, he was involved in law to assist veterans who had served in Iraq and Afghanistan. A check-box on income tax forms made it easier for veterans access benefits and services.

In 2011, a poll was released showing that Scott Brown remained the most popular politician in Massachusetts. He had an approval rating of 73 percent.

Scott Brown married Gail Huff after meeting her during his college years when he was working as a model. They have two daughters. Ayla and Arianna.

Before his political run in New Hampshire, Scott Brown established permanent residency in Rye, New Hampshire. He works for Fox News Channel reporting on politics. Brown is a supporter of Donald Trump.

Scott Brown made a controversial comment relating to gay parenthood which caused a furor. He later voted against a law allowing gay couples from other states marrying in Massachusetts. He also voted to ban gay marriage and opposed the repeal of the Defence of Marriage Act.

There was criticism in 2015 when Brown endorsed a multi-level marketing product on his Facebook page. Citizens for Responsibility and Ethics in Washington were concerned about Brown’s non-disclosure of financial interest in the company.