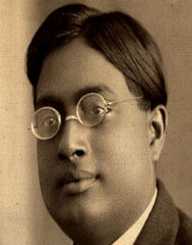 Satyendra Nath Bose was a famous Indian Physicist whose most prominent contribution is to the field of science involving quantum mechanics. Besides being a physicist, he was also accomplished and well-versed in other fields of science such as anthropology, zoology, mathematics, chemistry, and biology to name a few.

He was named after the bosons, one of the subatomic particles in particle physics in honor of his contribution to the field of physics.

He married Ushabati Gosh in 1914 when he was 20 years old. During their marriage, they had nine children together of which 2 of them died at an early age.

The Birth of a Genius

Born on January 1, 1894, in Calcutta (Kolkata at present), Satyendra Nath Bose was the oldest child in the family as well as the only boy. Followed by six other sisters, their ancestral home is a small village of Bara Jagulia located in the district of Nadia, West Bengal.

He started schooling near his home at the age of 5 before his family relocated to Goabangan where he was enrolled at New Indian School. He later transferred to Hindu School, one of the oldest and prestigious schools in India. He passed the entrance exams in 1909 with a high mark and was ranked fifth among the top passers.

Bose and the Quantum Theory

Satyendra Nath Bose worked with Meghnad Saha on the relativity of physics and quantum mechanics which was a prominent topic in the field of science during the time. It was the period of a breakthrough discovery on the horizon with a lot of theories being presented. Bose and Saha were the ones responsible for the translations of world-renowned German physicist Albert Einstein 's work on general relativity.

Bose worked in the University of Calcutta as a professor in the Physics Department. While working there, he wrote a paper regarding the Law of Planck's Quantum Radiation. His literary work played an essential factor with quantum physics. Bose directly mailed the letter to Einstein who translated and submitted it to the Zeitschrift für Physik, a series of compiled scientific publications in Germany. He was later nominated for a Nobel Prize for his work on the subject.

Because of his publication and Einstein's assistance, Satyendra Nath Bose managed to work with prominent scientific figures such as Marie Curie and Louis de Broglie. He worked in the crystallography and x-ray laboratories in Europe for two years.

After his work in Europe, Satyendra Nath Bose went back to his teaching career in Dhaka University in 1926. Because he was not a holder of a doctorate, he was not allowed a teaching position. Fortunately, he was recommended by Einstein thus earning the position of the Head of Dhaka University's Department of Physics.

Although his work alongside Einstein gained worldwide recognition, with the discovery of the Boson particle, it was British Physicist Peter Higgs who was credited for that discovery that greatly angered the people of India.

In his life, he received a number of prestigious awards, but one of the most prominent among them all is the Padma Vibhushan, which he received in 1954 which was the second-highest civilian award in India. He also became a member of the Fellow of the Royal Society in 1958. The following year, he was appointed as the National Professor in 1959 which is the highest honor given to a scholar in the country.