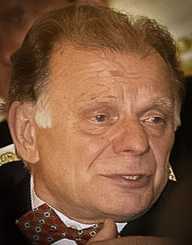 Discoverer of the radiation phenomenon known as the Cherenkov radiation, Pavel Alekseyevich Cherenkov was a Nobel Prize-winning physicist from Russia. His most important discovery was the radiation emitted by highly energetic atomic particles moving with velocities faster than light in a given medium. Cherenkov discovered the omission of blue light when this phenomenon takes place.

Pavel Cherenkov was a pioneering physicist in his lifetime, contributing a lot to research on cosmic rays and nuclear physics in Russia. For his contribution, apart from the Nobel Prize, he won two Stalin prizes – a highly recognized award for scientists in Russia.

Pavel Cherenkov was born on July 28, 1904, in a small village called Novaya Chigla in  South Russia. His parents were Alexey Cherenkov and Maria Cherenkova. His star sign was Leo.

The family had a poor background.

Cherenkov did not have a pleasant childhood – his mother passed away when he was only two years old. His father remarried and produced more children. Living with eight brothers and sisters, Cherenkov grew up in poor living conditions and was forced to do labour jobs at just 13 years of age. He did not receive a lot of primary education because of this.

When Pavel Cherenkov was 16, a Soviet secondary school was started in his village. Excited, he joined the school and continued to work as a manual labourer. He went to the State University without finishing secondary education as he was old enough. He studied physics and mathematics and graduated in 1928.

Pavel Cherenkov understood the importance of education as he was denied the privilege. So after graduating, he started teaching science in evening classes to laborers like him in the in Kozlov, Camberwell province. In 1930, Cherenkov joined Lebedev Physical Institute as a researcher. It is one of the oldest research institutes in Russia. There he worked under S.I. Vavilov on nuclear radiation studying radioactive elements that were bombarded with highly energetic gamma rays.

In 1934, while experimenting, Pavel Cherenkov observed a bluish light coming from a substance that was brought into an excited state. This unique electromagnetic radiation was emitted by atomic particles traveling with a velocity faster than light in the given media. This discovery was an especially important one as it paved the path for research on cosmic rays and further nuclear physics. For his contribution, he was awarded the Nobel Prize.

Cherenkov assisted in the development of particle accelerators – like the Cherenkov counter – that could excite particles near to the speed of light.
Along with Wexler, he was awarded the Stalin prize for building up a two 50 million electron would MeV synchrotron.

Pavel Cherenkov continued to teach as a professor at the Moscow Institute of physical engineers for close to 25 years. He also helped to build the Cherenkov detector, which was installed in SputnikIII to observe the presence and velocity of particles moving at really high speeds in space.
Pavel Cherenkov was also elected as a member of the US National Academy of Sciences in 1985. Cherenkov was a lifelong researcher and continued to work until his death.

Pavel Cherenkov received the Nobel Prize in physics in the year 1958 - 24 years after his discovery of the bluish radiation that we now know as the Cherenkov radiation in his honor.

Pavel Cherenkov married in 1930 to Maria Putintseva who was the daughter of a Russian literature professor A. M. Putintsev. They produced two children – a son Alex and a daughter Yelena. Both of them grew up to become well-known scientists.