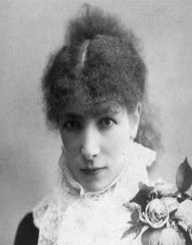 French actress Sarah Bernhardt was born Henriette-Rosine Bernard on the 22 October 1844 in the Latin Quarter of Paris. Her mother, Judith Bernard was a high-class courtesan of Dutch descent, and her biological father’s identity was never verified. It is believed that her biological father supported his daughter financially by paying for her education. Bernhardt was raised in Brittany and later in Paris.

She was educated at Madame Frossard's School for Young Ladies and the Notre Dame du Grandchamp Convent School. Bernhardt then enrolled at the Paris Conservatoire, an acting school (1860-1862).

At the completion of her studies, Sarah Bernhardt joined Theatre Francais and made her debut in Racine’s Iphigenia in August 1862. Other early performances include Les Femmes Savantes, Hippolyte and Valerie. The critics largely ignored the young actress, and in 1863, she was dismissed by the Comedie-Francaise because of an altercation she had with an established actress.

It was at the Odeon Theatre (1866-1872) that Sarah Bernhardt matured and settled into acting. She appeared on stage in Dumas’ Kean (1868) as Anna Damby; Cordelia in Shakespeare’s King Lear (1868) and Zanetto in The Passerby (1969). After six years at the Odeon Theatre, Bernhardt was re-employed at the Comedie-Francaise where the critics became increasingly impressed with her stage presence, voice, and beauty.

Stage roles from this phase of Sarah Bernhardt's career include her success as Desdemona in Othello (1878). When the company took their production of Othello to London, her acting was widely acclaimed. After forming her own travelling theatre company in 1880, Bernhardt travelled in Europe, England, America, and Canada. She first appeared in New York in 1880 and after that visited the country frequently, including four farewell tours.

During the early 1890s, she visited Australia, New Zealand, and South America. She became known as the Divine Sarah and is today considered one of the greatest actresses of all time. Social historians also see her as being at the beginning of celebrity culture. Apart from acting, Bernhardt was a sculptor. She studied sculpture with Mathieu Meusnier and Emilio Franchesci, and in 1874, she held her first exhibition at the Paris Salon, which she regularly did until 1886. She also had exhibitions held in New York, Philadelphia, and London.

Sarah Bernhardt's sculptures were exhibited at the World’s Columbia Exposition (Chicago, 1893) and the Exposition Universelle (Paris, 1900). As well as acting and sculpturing, Bernhardt directed a theatre company, supervised the costumes and sets of productions and designed dresses. She authored a number of books including a novel Petite Idole (1920), My Double Life: Memoirs of Sarah Bernhardt (1907), a memoir. She also wrote a book on the craft of acting, The Art of the Theatre (1923).

Sarah Bernhardt had her right leg amputated on the 22 February 1915. This operation followed a fall she had sustained on stage in the play Tosca.

Sarah Bernhardt was made a member of the French Legion of Honour (1914) and was given a star on the Hollywood Star Walk.

Bernhardt had a son with Charles-Joseph Eugene Lamoral de Ligne, Maurice Bernhardt (b.1863). In 1882, she married Aristides Damala. The couple had no children. Her son had two daughters. Sarah Bernhardt died in Paris, France on the 26 March 1923. She was 78 years of age.