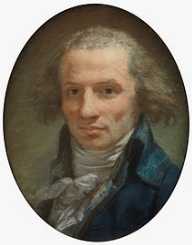 Pierre-Paul Prud’hon was born in the commune of Cluny, Saone-et-Loire, France, on April 4, 1758. His father was an affluent stonemason. Both of his parents passed away when he was very young.

Pierre-Paul Prud’hon started his training at an academy in the city of Dijon, France. He then spent some time in Paris studying under the painter Jean Baptiste Pierre. In 1784, at the age of 26, he moved to Rome, Italy.

Pierre-Paul Prud’hon returned to Paris and started his career. He began by making drawings for engravers and by decorating mansions. He had many wealthy and powerful clients.

Prud’hon worked on many more portraits, such as those of Duchess Louise Antoinette Lannes, General Louis Antoine de Saint-Just, and many others. He received international fame for his painting Justice and Divine Vengeance Pursuing Crime, which he painted in 1808. In 1822, he made the painting Crucifixion for the Cathedral of Saint Etienne in Metz. It became his most famous work, and it is currently on display in the Louvre.

Pierre-Paul Prud’hon's work could be classified as both Romanticism and Neo-classicism. His greatest inspiration was the Italian painter Correggio. He was greatly influenced by his soft style and colors. He was also great at drawing female figures and portraits.

He was not very good at understanding the science behind colors and pigment. Because of that, many of his paintings have become very dark throughout the years.

Prud’hon was admired by artists and writers such as Eugene Delacroix, Jean Francois Millet, Charles Pierre Baudelaire, and Marie Henri Beyle Stendhal. He was a significant influence on the young painter Theodore Gericault, who often copied his works.

In 1778, Pierre-Paul Prud’hon married a woman named Jeanne Paugnet because he had gotten her pregnant. Their marriage was miserable, and they often spent time apart. In 1803, they finally separated.

A while later, he met a young painter named Constance Mayer. He became her mentor. They later began a romantic relationship.

In 1821, Pierre-Paul Prud’hon's girlfriend committed suicide. He was devastated by that, and he could barely continue painting. He passed away on February 16, 1823, at the age of 64.