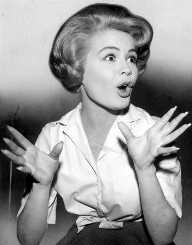 Sandra Dee was born on April 23rd, in 1942. She was famous for being an American actress during the golden era. Dee’s acting career took off from the time she was still young. Initially, she featured in some commercials. Later on, during her teen years, she ventured into the film industry. She earned high acclaim after playing ingénues during the 1950s and 1960s. However, things turned ugly during the late 1960s as her career fell apart. Her relationship also suffered as her marriage to Bobby Darin also came to an end around this period.

Sandra Dee was born on April 23rd, 1942. Her place of birth was in Bayonne, New Jersey. She was the only daughter of John Zuck and his wife, Mary. Her parents soon separated before Dee clocked five years.

By the time Dee was 12, she had earned herself high acclaim in TV commercials. Shortly after, she tried her luck in the film industry when she was 14 years old. Her debut role was in the 1957 film dubbed Until They Sail. This occurred after she had moved to Hollywood with the main intentions of pursuing her acting career.

While in Hollywood, Dee enrolled with Hollywood Professional School. In 1958, she graduated from University High School.

After featuring in her debut film in 1958, Sandra Dee rose quickly to the spotlight of her career as she was bestowed with a Golden Globe Award for being the new star of that year. In 1958, she played the lead role in The Reluctant Debutante. While Dee was enjoying the new success that had come to her side, she was suffering from anorexia. This eating disorder often affected her kidneys.

Regardless of the health issues that she was facing, Sandra Dee obtained her first commercial success in 1959. This was after featuring in Gidget. Also, during the same year, she landed on the lead role in A Summer Place which was also a huge box office hit.

Dee also acted alongside Lana Turner in the 1959 hit film called Imitation of Life. This was yet another box office success as Universal Pictures ranked it among the highest grossing films at the time. With her remarkable role in this film, Dee was already a household name.

Sandra Dee continued enjoying her film success during the 1960s. She acted alongside Bobby Darin, a pop idol, in 1960. Later on, the two tied the knot. The two kept their marriage away from the public eye. Two years later, they again acted together in If a Man Answers – 1962. The couple was again on screen together in 1965 in the film called That Funny Feeling.

For about three years beginning in 1960, Dee was ranked among the best female actors. In the late 1960s, she featured in films such as A Man Could Get Killed – 1966, Doctor, You've Got to Be Kidding! – 1967, and Rosie! – 1970.
In 1967, she divorced Darin. This was the end of the acting career success that she had earlier enjoyed as everything came crumbling on her.

After divorcing the pop start that Sandra Dee had been shortly married to, her career also changed drastically. All through the 1970s, she experienced a dwindled attention from her audience. In fact, she only featured in one film which was slightly successful. This was her role in The Dunwich Horror – 1970.

Sandra Dee and Darin had one child in their short-lived relationship. After annulling their relationship, Bobby Darin passed away only six years later.

In February 2005, Sandra Dee passed away after suffering from kidney complications.