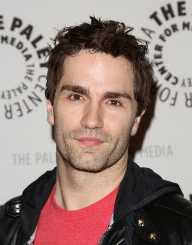 Sam Huntington began his career when in 1996 he starred in the movie ‘Harvest of Fire.’ In 1997, he appeared in an episode of Disney’s ‘Jungle 2 Jungle’. He has starred and appeared in films such as ‘Rolling Kansas,’ ‘Freshman Orientation,’ ‘Not Another Teen Movie,’ ‘Detroit Rock City’ and ‘River’s End’ among other movies. He has also guest starred in ‘CSI: Miami,’ ‘Law and Order,’ ‘CSI: NY’ and ‘Veronica Mars.’

In 2006, Sam Huntington married actress and producer Rachel Klein with whom he has two children. He is currently thirty five years old. He still acts to date. He is very passionate about the roles he gets in movies.