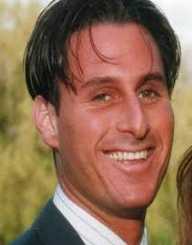 Ronald Lyle ‘Ron’ Goldman was born on July 2, 1968. He was an American restaurant waiter. He was friends with Nicole Brown Simpson. In 1994, they were both killed at Nicole’s Brentwood, Los Angeles home. In 1995, O.J. Simpson, Nicole’s ex-husband, was acquitted of their murders. In 1997, he was found liable for the deaths following a civil suit. He died on June 12, 1994, at the age of twenty five.

Ronald Lyle ‘Ron’ Goldman was born on July 2, 1968, in Chicago, Illinois in the United States of America. He was born to Sharon Rufo and Fred Goldman. When he was six years old, his parents divorced, so he spent some time with his mother. He was later raised by his father. He was brought up alongside his sister, Kim Goldman.

He attended Adlai E. Stevenson High School in Illinois. After graduating high school, he joined the Illinois State University, but he stayed in the school for only one semester. At the age of eighteen, he moved with his family to Southern California. He loved volunteering for charitable works.

Ron Goldman settled well in Californian and joined Pierce College where he took some classes. He found his place and moved out of his father’s house. He worked as a tennis instructor and headhunter to earn a living. He also worked as a waiter for several restaurants. He was also a model for Barry Zeldes who is the owner of Z90049.

He later earned a licence as an Emergency Medical Technician, but he did not pursue that career to the end. Ronald wanted to be in the hotel management industry. He also had aspirations of becoming an actor hence in 1992; he appeared in the game show ‘Studs.’

Friendship with Nicole and Death

In 1994, Ron Goldman met Nicole Brown at a time when he borrowed her Ferrari. They instantly became friends and would accompany each other to clubs and social gatherings. Before Ron died, he was a waiter at Mezzaluna Trattoria, which is a restaurant in Brentwood. Brown later called the restaurant and reported that her mother had left her glasses at the table where they were eating at. Ron volunteered to drop the glasses after his shift at Brown’s home.

Before he went to Brown’s home, he passed by his apartment where he had a commitment with his friend, Stewart Tanner. When he arrived at Brown’s house, he was stabbed to death along with Brown on the walkway that led to her condominium. He died on June 12, 1994, at the age of twenty five. He was buried at Pierce Brothers Valley Oaks Memorial Park in Westlake Village in California, United States of America.

O.J. Simpson was tried for both their deaths, but he was acquitted of the charges in 1995. In 1997, he was found liable for Ron’s wrongful death and awarded his family $19.5 million in damages. The family also took all rights of Simpson’s book ‘If I Did It’ as part of the court settlement.