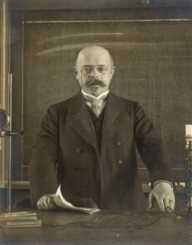 Walther Nernst was born on June 25, 1864, in Wabrzezno, Poland. His parents were Ottilie (Nerger) and Gustav Nernst. He also had four siblings.

As a child and teenager, Walther Nernst attended a school called the gymnasium. At this school, he focused more on writing and reading than science. While in school, he considered becoming a poet, however, he decided to work with the sciences instead when it was time for him to pick a college. Throughout his university academic career, Nernst attended four universities in Germany. At these universities, he focused his studies in science and mathematics. In particular, he focused on the physics more than any other science. The four universities he attended were the University of Berlin, Graz, Wurzburg, and Zurich. He stayed at school until he received a Ph.D.

After earning his Ph.D., Walther Nernst went on to work at the University of Leipzig. There, he did mostly research work. While working at the university, Walther Nernst created the Nernst Equation. This equation relates the potential of a reaction (either half or full reaction) to the standard electrode potential, as well as some other variables.

Nernst's next job was working as an associate professor at another university, the University of Gottingen. While there, he taught classes, as well as wrote his textbook, which was published in 1893. His textbook was an immediate hit in the science and math community. He was offered many jobs because of his book, but he eventually agreed to take on the positions of being the Physical Chemistry chair at the university he worked at while writing the book. While working as the Chair, he established the Institute for Physical Chemistry and Electrochemistry. He made himself the director of the program, which allowed him to make most of the major decisions for the institute.

In 1905, Walther Nernst left the Gottingen University to work for the University of Berlin as a chemistry professor. In the same year, he presented what he called the New Heat Theorem. This was later renamed the third law of thermodynamics. This would then be known as one of his most significant accomplishments in physics. This law states the following: “It is impossible to reduce the temperature of a system to absolute zero in a finite number of operations.”

Nernst’s career took another turn at the start of World War I. Walther Nernst was initially on Germany’s side in the war. He worked with the army as the Staff Scientific Advisor. He also signed the Manifesto of Ninety-Three, as he was one of ninety-three scientists who supported Germany's cause.

After the war, he went back to working in universities. He proposed another theory, the Atomic Chain Reaction Theory, which roughly states, “any reaction where free atoms are formed and can decompose other molecules to create more free atoms, and this continues in a chain reaction.” After this proposal, Nernst continued to work at the University of Berlin until 1922, when he resigned. He did not become unemployed. Instead, he became the director of the Physikalische-Technische Reichsanstalt. However, he only worked at the position for two years before returning to teach at Berlin University. Nernst later retired in 1933 to live in isolation, as he feared and hated the rise of the Nazi party.

Walther Nernst won the Nobel Prize in Chemistry in 1920.

Walther Nernst won the Franklin Medal (from the Franklin Institute of Philadelphia) in 1928 for his work in the field of chemistry.