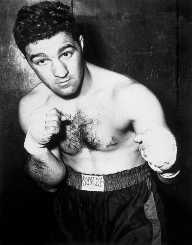 Rocky Marciano was an American professional boxer and heavyweight champion. Known as The Rock from Brockton, Marciano had an unparalleled boxing career. Throughout his career, he remained an undefeated champion, one of only two US boxers to do so. With his strong left hook and equally punishing right hand, he knocked out several of his opponents on his way to glory.

Rocky Marciano was born as Rocco Francis Marchegiano on Sep 1, 1923, to Italian immigrants, Pierino and Pasqualina Marchegiano. His birthplace is Brockton, Massachusetts. Marciano had five siblings – 2 brothers and three sisters.

One of the best heavyweight boxers of all time, Rocky Marciano was not as tough when he was a child. He caught pneumonia at 18 months of age, which nearly killed him.

Rocky Marciano went to Brockton High School where he studied till 10th grade. At school, he played on the baseball and football team.

Marciano served in the US army during the World War II. Joining in late 1943, he was on duty for a little more than two years, with his service ending in 1946.

Rocky Marciano’s first bout was in 1947. Over the next few years, he gained enormous popularity and money. Even with his short height, and lack of formal training early in his career, he was relentless, determined and never quit or backed down from a fight.

Rocky retired undefeated, defending his title six times. The world knows him today, as one of the best heavyweight boxers in the history of boxing.

Rocky Marciano had a few amateur boxing bouts after completing his service in the army. His first professional fight was against Lee Epperson in 1947. He knocked out Epperson, and he would go on to do the same to most of his opponents later in his career.

After having moderate success at amateur boxing, Marciano took boxing seriously and trained under Charley Goldman.

Rocky Marciano returned to professional boxing in 1948 and knocked out Harry Bilizarian in three rounds. His next 16 opponents suffered the same fate, a loss by knockout. Marciano kept his streak alive winning against boxers like Ted Lowry, Phil Muscato & Carmine Vingo, mostly by knockouts and the rest by unanimous decisions.

Marciano’s fierce talent was recognized after the bout with Joe Louis. Fighting in his career’s last fight, Louis was knocked out by Marciano. This fight earned Marciano the respect a great boxer deserves. His continued success finally won him a title shot in 1952.

3.  As the World Heavyweight Champion

Rocky Marciano faced Jesse Joe Walcott for the Championship title. After falling behind in the scores, he landed the punch that knocked out Walcott. This became his traditional finishing move, nicknamed the “Susie Q.”

In 1956, Marciano retired from professional boxing with a record of 49-0. 43 of this wins were by knockout, the highest percentage in boxing history. He remained an undefeated champion.

After giving up boxing, Rocky Marciano tried different careers. This included a boxing commentator, as a referee, and in television shows.

Rocky Marciano died in a plane crash on August 31, 1969. Next day he would have turned 46. A surprise birthday party was waiting for him.

During his boxing days & later career, his family complained of not getting enough of his time. Ironically, he was going home.

Marciano is remembered for his sluggish, but relentless & rough fighting style. He kept coming at his opponent with a swarm of vicious blows.

Rocky Marciano met his future wife Barbara in 1947.  They married in 1951. The couple had a daughter, Mary Ann and an adopted son, Rocco.

Rocky Marciano was the inspiration for the character ‘Rocky Balboa’ in the blockbuster ‘Rocky.’