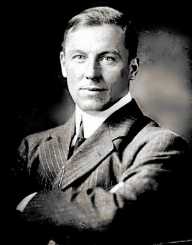 Robert W. Service was born on January 16, 1874.  He is known for his poetry and writings, which includes The Shooting of Dan McGrew, the Call of the Wild and The Cremation of Sam McGee.  He was also referred to as ‘the Bard of the Yukon’.  He died on September 11, 1958.  His novels were successful as the poets were received as more comical.

Robert William Service was born on January 16, 1874, in Preston, Lancashire, England.  His father Robert Service had ten children and Service was the third.  Service moved to Kilwinning where his paternal grandfather was the postmaster and he went to live with his three maiden aunts.  On his sixth birthday, he is believed to have constructed the verse of his work, a grace.  At the age of nine years, he went back to his family who had relocated to Glasgow, Scotland.

Service went to Hillhead High School in Glasgow, which was the best school.  While in school, he developed interest in poetry and books.  During his career, he enrolled in the and took a course in English Literature University of Glasgow for Career.  He, however, dropped out after having a feud between him and his professors because of his tremendous performance and astuteness.

After school, Service started working at a shipping office which letter closed.  He then went to work for Commercial Bank of Scotland, which later changed to Royal Bank of Scotland.  It is here where he had a smooth working that enabled him to read the works of Robert Browning, John Keats, and Lord Alfred Tennyson.  It is rumored that after doing his writings, he started selling them while he was a banker.  In his twenties, he moved to Canada where he looked for a series of jobs like in 1895 where he took up to be a cowboy wearing a Buffalo Bill outfit. That ended up disappointing him and had to survive through his parents' Scottish neighbors and friends.

In 1989, he worked as a store clerk in Cowichan Bay, British Columbia.  In 1900, Service got a publishing deal with Victoria Daily Colonist for six of his poems.  After two years of recognition, he printed more works that include Music in the Bush.  He got a work in Canadian Bank of Commerce after Commercial Bank of Scotland sent a letter of reference in 1903.  In 1904, he was transferred to a new growing town in Yukon from Kamloops.  He, however, continued writing and came up with his famous works of The Shooting of Dan McGrew and the Cremation of Sam McGee.

Service then came up with an assorted work of all his poems calling it Songs of a Sourdough that became a hit, which later continued selling in other parts of the world like New York, Philadelphia, and London.  In 1908, his three-year service at the bank entitled him to a three-month mandatory pay leave as was established in Yukon.  He came back and got a transfer to Dawson helping him to meet the Gold Rush veterans.  After staying with them and hearing their experiences, in 1908, he came up with a book, Ballads of Cheechako that had a big success.  He resigned from banking in 1909 and focused in writing his first novel, The Trail of ’98, which became a bestseller after being published in New York.  After traveling to France, he came back to write this third poetry book, Rhymes of a Rolling Stone.

In 1912, Service was Toronto Star’s correspondent.  In 1913, he went to Paris and served as war correspondent and ambulance driver.  He also posed as a painter in Latin Quarter.  He was denied to join the army due to varicose vein.  He wrote Rhymes of a Red Cross Man in 1916, which was dedicated to World War I deceased.  In 1921, he came up with Ballads of a Bohemian.  He was the wealthiest writer who lived in Paris at that time.

During the 1920s, Service began writing thriller novels.  In 1922, he was able to publish in New York the Poisoned Paradise, a Romance of Monte Carlo.  In 1923, he also published in New York the Roughneck.  A Tale of Tahiti.  The 1923 publications were also reduced to silent movies.  He returned to Kilwinning and erected a family memorial.  During 1930, he visited the Soviet Union and came up with Ballad of Lenin's Tomb, which was satirical work that never was translated to Russian.  In 1942, he played himself in the movie The Spoilers.  Service later wrote two autobiographies:  Ploughman of the Moon and Harper of Heaven.

Service was awarded the 1914-15 Star award.  He also received the British War Medal and Victory Medal.

In 1913, Service married Germaine Bourgoin and had a daughter, Iris.  He has been named after schools like Service High School, Anchorage, Alaska, and Robert Service School in Dawson City.  In 1976, he was honored in the Canadian postage stamp.  Service has also been named after a street in Whitehorse called Robert Service Way.  Bard & Banker public house was also dedicated to him where he used to work in the then Canadian Bank of Commerce branch. he died on September 11, 1958.