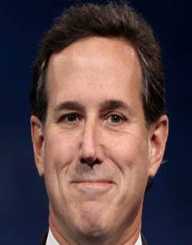 Richard John Santorum was a US Senator and congressman from Pennsylvania who served the Senate for two terms between 1995 to 2007. A life-long member of the Republican Party, he ran for the presidential candidacy twice in 2012 and 2016.

While he lost to the chosen nominee Mitt Romney in his impressive 1st campaign, in his 2nd endeavor, the poor results of the quadrennial electoral gatherings of Iowa caucuses dashed his hopes.

After leaving the Senate, Rick Santorum has worked as an attorney and consultant. In January 2017, he took up the post of a senior political commentator at CNN.

Rick Santorum was born on May 10, 1958, and spent his childhood days in West Virginia and Pennsylvania. He showed his inclination toward the Republicans from an early age after serving as the chairman of College Republicans of Pennsylvania State University.

Rick Santorum also volunteered for Senator John Heinz at around the same time. He subsequently became a member of the Tau Epsilon Phi and got an MBA degree from the University of Pittsburgh. In 1986, he got his law degree and practiced for four years at Kirkpatrick & Lockhart.

He supported some important legislation and voted against the North American Free Trade Agreement. He joined the ‘Gang of Seven’ which focused on exposing Congressmen involved in scandals, especially the House banking scandal, resulting in widespread disgrace to them.

In 1994, Rick Santorum, who was considered mainly as an underdog, defeated the Democrat Harris Wofford and got elected to the Senate. He was reelected in 2000, and from 2001-2007 he was the third highest ranking Republican in the Senate.

While serving as a Senator, Santorum contributed to many legislations and policies which had a far-reaching impact on the socio-political fabric of his country.

In 1996, Rick Santorum authored the bill and paved the way for the enactment of the Personal Responsibility and Work Opportunity Act. He also co-sponsored the Workplace Religious Freedom Act of 2002. For quick redressal of issues related to the same, Santorum established the Congressional Working Group on Religious Freedom a year later.

The members met monthly to discuss other issues like anti-Semitism, the CARE act, etc. Rick Santorum introduced a provision to the No Child Left Behind education bill, which propounded the teaching of "intelligent design" alongside the evolution theory of Charles Darwin in schools. But the Santorum Amendment failed, and educational and scientific organizations demanded the amendment to be removed.

National Weather Service’s ‘insufficient’ evaluation warning calls for Hurricane Katrina prompted Rick Santorum to table the National Weather Servies Duties Act in 2005. Santorum supported President Bush’s War on Terror policy. He was a staunch supporter of the United States’ war against Islamic terrorism and sanctioned the Syria Accountability Act in 2003 and the Iran Freedom and Support Act in 2005.

In 2006’s re-election bid, Rick Santorum lost to Democrat Bob Casey. In January 2005, Santorum had expressed his desire to run for Senate Republican Whip, but the loss meant that this idea never materialized.

Santorum took a sabbatical from politics and worked as a lawyer and political commentator in the meantime.

With his Tea Party supporters alongside him, Rick Santorum contested for the 2012 Republican nomination but eventually had to relinquish to Mitt Romney. Santorum was entangled in a lot of controversies which contributed to the waning of his popularity. In 2003, he was caught comparing homosexuality to abusive ‘man on child and man on dog’ sex or bestiality.

There were controversies with his legal residence, statements about condemning ‘radical feminism’ from his book ‘It Takes a Family: Conservatism and the Common Good,' openly opposing same-sex marriages, civil unions, polygamy, artificial birth control, prohibition of pornography, etc.

Rick Santorum's personal life was also in turmoil and also played a part in sabotaging his campaign. His youngest daughter, Isabella, suffered from a rare disease and was hospitalized several times, in the midst of the campaign.

In 2015, Rick Santorum announced his second presidential bid with a new-found unique selling proposition of instigating the middle class by giving lengthy speeches on their sufferings in the hands of ‘big government politicians’ with ‘president tied to big money.’ But a magniloquent and ever- imposing Donald Trump’s triumph at Iowa Caucus ended his campaign.

In 2017, he joined CNN as a senior political commentator.

Rick Santorum is married to Karen Garver with whom he currently has seven children. He is a dedicated fantasy baseball player in his pastime.