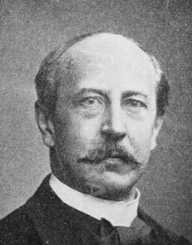 Henri La Fontaine was born 22nd April 1854, in Brussels, Belgium. He studied law at the Free University of Brussels.

When Henri La Fontaine completed his legal studies, he was admitted to the bar in 1877. He soon became known as an authority in international law. In1890, along with his sister Leonie, Henri La Fontaine founded the Belgian League for the Rights of Women. The brother and sister team were strongly in support of women’s rights and suffrage.

Henri La Fontaine then went on to become Professor of International Law at the Free University of Brussels in 1893.

Henri La Fontaine was also an advocate for the International Peace Bureau and was instrumental in The Hague Peace Conferences in both 1899 and 1907. Henri La Fontaine became President of the Bureau in 1907, a position he retained until his death in 1943. Henri La Fontaine worked tirelessly for world peace, serving in and founding several organizations with that end in mind. He was very forward-thinking, proposing a world university, and world parliament.

He founded the Union of International Associations in 1907, along with Paul Otlet. They also co-founded the Institut International de Bibliographie (this later became the International Federation for Information and Documentation (FID)). FID became the center where any notes or papers from around the world could be found. It was a mammoth task he successfully undertook.

Throughout his life, La Fontaine worked non-stop towards world peace and a one-world government.