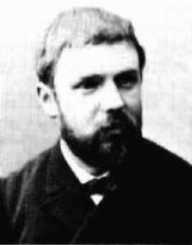 Henri Poincare was born 29th April 1854, to Leon Poincare, and Eugenie Launois. He was born in the city of Nancy, in France. He was born into an upper-class family, with his father being a Professor of Medicine at the University of Nancy. Although raised as a Roman Catholic, Henri Poincare left the church and became what was termed a “free thinker.”

Henri Poincare did home-schooling for a time as a youngster, due to contracting diphtheria and being very ill. He was tutored by his mother. In 1862, he was enrolled in the Lycee for his education, where Henri Poincare quickly became one of the top students, and he graduated in 1871 with a Bachelor Degree in Science and Letters.

In 1873, Henri Poincare continued his study at the Ecole Polytechnique and graduated in 1875. He continued to be outstanding in his studies, with mathematics his core subject, and in 1874 his first paper was published, titled, Demonstration nouvelle des proprieties de l’indicatrice d’une surface. Whilst studying mathematics, he concurrently studied mining engineering, and graduated with his degree in mining engineering in March 1879, from the Ecole des Mines.

Henri Poincare joined the Corps des Mines upon graduation, in the role of Inspector for the Vesoul region. His first inspection into a mining disaster happened that same year, in 1879, and he was credited for the way in which he handled the situation. He was also preparing for his Henri Poincare in Science, in mathematics. His thesis was going to be on “differential equations.” He graduated from the University of Paris in 1879. At the end of 1879, Henri Poincare became a Junior Lecturer in Mathematics at the University of Caen in Normandy.

During this time, Henri Poincare published his first major article on automorphic functions. He was quickly recognized as one of the greatest mathematicians in Europe. In 1881, he was offered a teaching role at the University of Paris, in the Faculty of Sciences. Henri Poincare accepted the role and taught there for the rest of his career. In 1883 he also taught at the Ecole Polytechnique, where he taught until 1897.

At the University of Paris, Henri Poincare was initially Associate Professor of Analysis, but he eventually held the chairs for Physical and Experimental Mechanics, Mathematical Physics and Theory of Probability, and Celestial Mechanics and Astronomy.

In 1881, Henri Poincare put forward a new branch of mathematics called the qualitative theory of differential equations. He was able to demonstrate his method in relation to celestial mechanics, as well as mathematical physics.

At the same, Henri Poincare was still involved with the mining industry. He worked as an engineer between 1881 and 1885 for the Ministry of Public Services. He became Chief Engineer of the Corps de Mines in 1893, and then Inspector General in 1910.

Henri Poincare made significant contributions to many areas of science, mathematics, and physics. Some of these included: celestial mechanics, fluid mechanics, optics, potential theory, quantum theory, theory of relativity, and physical cosmology. Specific topics amongst these subjects included the chaos theory, the theory of electromagnetism, the special theory of relativity, number theory, the Poincare recurrence theorem, and algebraic geometry. There were many others.

In 1905, Henri Poincare proposed gravitational waves emanating from a body and propagating at the speed of light. Interestingly, Henri Poincare worked on the theory of relativity at the same time as Einstein, although the two had different interpretations in the work that they did. Henri Poincare continued with the “ether” theory, whilst Einstein established the mathematical equivalent.

Henri Poincare also studied philosophy, and later in his lifetime became known as a Polymath, which is a person with a vast array of knowledge across a vast array of subjects. He also wrote many books and papers, and over 20 of his books have been translated into English, including, Science and Hypothesis (1904), The Relativity of Space (1913), and The Principles of Mathematical Physics (1905).

Henri Poincare was elected to the French Academy of Sciences in 1887 and became its President in 1906.

From 1901 to 1903, Henri Poincare was the President of the French Astronomical Society.

Henri Poincare received many awards and honors, some of which include:

1899:   Member of the American Philosophical Society

1900:   Gold Medal of the Royal Astronomical Society of London

In 1881, Henri Poincare married Louise Poulin d’Andesi. They had four children together, three girls and a boy.

Henri Poincare has both an asteroid and a crater on the moon named after him.