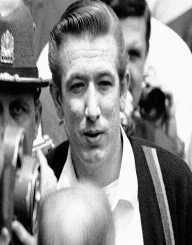 Mass murderer Richard Speck was born on the 6 December 1941 in Kirkwood, Illinois to Margaret Carbaugh and Benjamin Franklin Speck. He was one of eight children born to the couple. When he was six years old, his father died and his mother, a strict Baptist raised him. When his mother re-married Carl Lindberg, the family moved to Lindberg’s home state of Texas. Lindberg was a violent alcoholic who flew into rages with his stepson. Speck, struggled at school and fell in with a group of wilder, older boys and got involved in drinking and fighting.

In the mid-1960s Richard Speck got married and fathered a child, but the marriage did not last long. He spent most of the marriage in prison for various offences and was a violent husband. His wife Shirley filed for divorce in January 1966 and later wrote that he had raped her at knifepoint on many occasions. Later that year, Speck was arrested for a robbery and stabbing incident but was let off on the burglary charge and fined $10 for the stabbing.

Richard Speck then left Dallas with the assistance of his sister Carolyn and settled in Monmouth, Illinois where he had lived as a child. He stayed with family friends and found a job as a carpenter but soon quit working and spent time at the local pub, the Palace Tap. In April 1966, a local woman Virgil Harris was attacked and raped in her home. On the 13 April, a barmaid Mary Kay Pierce was found dead behind the pub building.

Speck was questioned but fell il and was due to return on the 19 April. When he did not turn up for his interrogation on the 19 April, investigators tracked him down to his hotel and, although he was not there, they discovered items belonging to Virgil Harris as well as stolen items from other burglaries on their books.

Richard Speck left town and went to Chicago where his sister Martha was living. Speck told his family that he intended joining the merchant navy and his brother-in-law dropped him off at the National Maritime Union Hall Buildings a few doors down house residential accommodation for student nurses of the South Chicago Community Hospital. He found it difficult to find work, at one stage, he was offered a job, but it fell through, he fell ill and then began a drinking binge.

The day of the mass killing, Richard Speck himself with weapons and went to the student residence for nurses from the South Chicago Community Hospital. He forced his way into the house and tied up eight young women. Crime writers would later be mystified as to how he managed to tie the women up with the minimum amount of fuss. He systematically took them out of the bedroom one at a time, raped and murdered them. One young woman had rolled under a bed and hid there until Speck left the premises in the early hours of the morning and she alerted authorities.

Police managed to identify Richard Speck within hours of being called to the scene and the Maritime Union Hall agent recognised Speck from a sketch done by a police artist. After his capture and trial, Speck avoided the death penalty and was sentenced to up to 100 years in prison. He died in prison from a heart attack on the 5 December 1991.