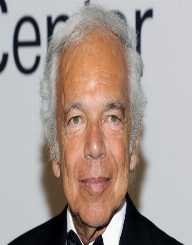 Ralph Lifshitz had a Jewish heritage and was born on October 14th in the year 1939 in New York. His parents were Frank and Fraydl Lifshitz, and they lived in the Bronx area. His last name was difficult to pronounce, and this made him alter it to Ralph Lauren as his schoolmates twisted it to make fun. His name change was official at 16.

He went to high school in 1957 at DeWitt Clinton High School, from where he eventually graduated. He moved on to Baruch College for business studies but had to leave for the U.S Army before graduation. He left the army and worked briefly as a salesman with Brooks Brothers.

While he worked, Ralph had thoughts of his pastime of selling ties to his schoolmates in high school and thought of reinventing this. By 1966, he was inspired by European–styled designs of neckties. His employers were not keen about this, leading to his decision to go solo.

As he worked his way, Ralph Lauren picked rags and turned them into ties using his label. He worked the hard way to drop his designs at retail shops around New York. The fashion house, Neiman Marcus decided to give him a boost and ordered dozens of his ties in their hundreds. This was the big break he longed for, and it was a huge lift.

He approached Norman Hilton for a loan of $50,000 in 1967, and the retail chain approved this. He branded his necktie store with the name ‘Polo.’ This name was a trademark of his former employers, Brooks Brothers, and they gave him the rights.

As he made progress in his business, Ralph expanded to Rodeo Drive in the Upscale Beverly Hills and launched a Polo shop there in 1971. His renowned short-sleeved shirt emblazoned with his trademark Polo logo was unveiled in the year 1972. His Ralph Lauren women collection was also launched in 1972, and he has a range of fragrance and perfumes on sale.

More Recognition came his way when Ralph Lauren got the nod to clothe the stars on the set of “Annie Hall” and “The Great Gatsby.” He also kitted the cast of the 1975 film “The Wild Party.” He has added several other Hollywood credits to his name since then.

He took a more decisive step as the years rolled by converting his Rhinelander Mansion into a flagship store for the Polo by Ralph Lauren brand.

The Ralph Lauren Corporation was taken public in 1987 and started trading on the NYSE as a publicly quoted company. The symbol for the company at the exchange is “RL.”

Ralph signed a ground-breaking deal with NBC in the year 2000 for a PR blitz on print and screen as well as the cyberspace for the next 30 years.

Ralph Lauren has some charitable trusts such as the “American Heroes Fund” and the ‘Ralph Lauren Center for Cancer Care and Prevention.’ The former was launched to provide support for children whose parents were killed by the 9/11 attacks.  He is also behind the Pink Pony Fund.

He was also credited with a mention in 2012 when fortune magazine listed his company among the “Most Admired Global Brands.”

Ralph Lauren is one name that registers as an epitome of class and elegance in the fashion world. The business is said to be worth more than USD 10 billion while his networth was put by Forbes at USD 6 billion as at September 2015. This global leader in casual and menswear in the semi-casual niche is a vast enterprise.

His other apparel line covers sheets, women’s clothing and towels. He also has a furniture line that is a testament to his taste and sense of elegance. This is an area that he has also succeeded to carve a niche that is already enduring. As of 2007, the company was already present in 23 locations across America with over 35 boutiques.

Ralph clothed the 2012 Team USA to the Summer Games that year for the Global Olympics. His brand was ranked number one on the list of household and personal products by Forbes global business ranking in the year 2012.

This classy personality is also identified as a lover of state-of-the-art cars. Ralph Lauren is the owner of a rare crop of automobiles that have made their way to some museum displays.

Ralph Lauren got married to Ricky Anne Low-Beer, who was a part-time receptionist and teacher in 1984. They got married in the city of New York, and they have three children between them. David, Andrew, and Dylan are the names of the Lauren kids. David has stepped into the RL Corporation and has made a career, working at Polo.