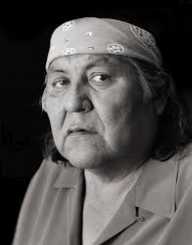 Rudolph Carl Gorman was born on July 26, 1931. He was a Native American artist. He was from the Navajo Nation. The New York Times refers to him as the ‘The Picasso of American Indian Artists.’ His paintings are more about Native American women, and they are accompanied by rich components of colour and fluids. He also worked on ceramics, stone lithography and sculpture. He loved foods, and so he wrote four cookbooks in his career.

Rudolph Carl Gorman was born on July 26, 1931, In Chinle in Arizona, United States of America. He was born to Adele Katharine Brown and Carl Nelson Gorman who was a painter and a teacher. His father was also a Navajo code talker during the Second World War. At the age of three, he started drawing, and he was raised in Navajo traditions and beliefs. When he was young, he tendered sheep with his aunts in Canyon de Chelly.

During his tendering days, he used to draw on rocks, the sand, and mud. He also made sculptures using clay with subjects such as Shirley Temple and Mickey Mouse. He was inspired by Jenny Lind who was a teacher at the Presbyterian Mission School to become an artist. After graduating high school, he joined the United States Navy. After he was discharged from the army, he joined Northern Arizona University where he majored in literature and minored in art.

In 1958, R. C. Gorman received a scholarship from the Navajo Tribal Council and enrolled at Mexico City College for their art program. He knew of Diego Rivera and was influenced by his work while still in college. He later attended San Francisco State University where he studied art and worked as a model.

In 1968, R. C. Gorman moved from California to New Mexico where he established the R. C. Gorman Navajo Gallery in Taos. In 1973, his work was shown in the ‘Masterworks of the American Indian.’ He became the first living artist to have his work shown in the show. The show took place at the Metropolitan Museum in New York City. His work was also explored in a series on American Indian Artists for the Public Broadcasting System. In 2003, he donated his library to Dine College in Arizona, United States of America.

In 1995, he received an Honorary Doctorate of Humane Letters from the Northern Arizona University. In the same year, he won the Camino Real Award from the Hispanic Chamber of Commerce in New Mexico. In 2002, the Palm Springs Walk of Stars was dedicated to him.

On November 3, 2005, R. C. Gorman died at the University of New Mexico Hospital, Albuquerque at the age of seventy four.