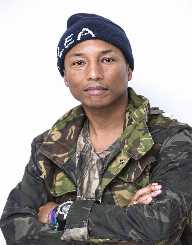 I was still there when I saw Pharrell Williams grow into the music industry! Wait, I was born just yesterday. In fact, he is over eight years older than me, or probably age mates. Even though I didn’t see him grow, I love his music to the brim; I bet you do as well. He is famously known as Pharrell who is currently a fashion designer, Pop Singer, Music producer, and drummer. Not only did he help to change the way people view pop music but also stole each stage with ambiance. His presence will never lose vitality.

On 5th April 1973, Pharrell Williams was born to teacher Carolyn Williams and handyman Pharaoh in Virginia Beach, Virginia. He is the eldest brother of four siblings; David, Cato, Pharoah and Psolomon Williams. He used to spend his childhood days both in North California and Virginia.

Williams went to Princess Anne High School where he participated in the school band. That is where he got his name Skateboard. While he was in his seventh-grade level, Pharrell met his friend Chad Hugo when at a summer camp.

Till now Pharrell is the leading vocalist of N.E.R.D rock and hip-hop band. He created the group together with his friend Chad Hugo and Shay Haley. In 1990, Hugo and Williams came up with the Neptune’s which is a record producing company that creates hip-hop, R&B and soul music.

Pharrell William’s work was later known internationally earning him a Grammy Award. He currently owns a media enterprise, which entails art, music, fashion, and entertainment. Further, he also started a fashion clothing store called Ice Cream Clothing as well as Boys Club. His records became the talk of the day, and celebrities such as Beyoncé and Jay-Z liked his vocal style. This is where he started his producing career, and the like of Madonna and Snoop Dogg were ready to give a trial.

Over the next four years, Pharrell and his N.E.R.D team continued to produce massive songs from the Backstreet set of the album to the 1997 song ‘Look at me’ by the Masses. Their biggest hit came when they created ‘Super Thug’ in 1998 that topped up on the Billboard Hot 100 at number 36. From 1998 to 2004 The Neptune’s gained a broad audience.

In the mid of 2012, Pharrell Williams launched a record label, and I Am Other which works under the Billionaire Boys Club Umbrella. In the process, he also came up with a YouTube channel - I am Other. In 2005 he partnered with The Nigo-Japanese fashion trend and launched his brand in SoHo, New York. And The Ice Cream Store in Japan. Some of his significant stores exist in United Kingdom, North America, Middle East and Asia.

Early 2008, Pharrell co-designed a series of glasses and sets of jewelry - Moncler Lunettes. In 2004, Pharrell did a favorable deal and partnered with Adidas Company. This is where he launched the NMB collection that was effective on July, 23; 2016. He currently owns a non-profit organization known as ‘From One Hand to Another’ (FOHTA). It is specified as an educational foundation that gives every child a chance to get enough resources for his or her education.

In 2011, Pharrell Williams was awarded An Annie Award for Music. From 2004 to 2007 he received three Grammy Awards as well as over five Grammy Awards nomination. He won 2003, and 2009 Billboard wins.

From 2002 to 2004 William received four Billboard nominations. In 2003, he garnered the Satellite Award Nomination for Work it out by Beyoncé’. Other recognition followed such as MTV and MTV Europe awards.

Pharrell Williams dated his long-term mate for more than five years. Helen Lasichanh and Pharrell got married in 2013, but their child was already born in 2008. The rocketed themed song in the ‘Despicable Me’ track was dedicated to Pharrell’s son. Early January 2017, the couple welcomed triplets; that was an excellent way to start the year. The names and sexes have not yet been released.