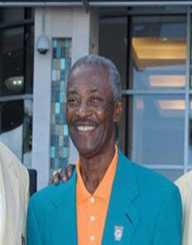 Paul Warfield was a pupil at First Street Elementary School, Warren, Ohio where his sixth-grade gym teacher, Clemons Seimdelia, was also the football coach at the school. Warfield later said that Seimdelia was an early influence. He did his high schooling at Warren G. Harding School before enrolling at Ohio State University. Then, he obtained a master’s degree from Kent State University (1977).

After five seasons with the Miami Dolphins, he played one season with the Memphis Grizzlies (1975) in the World Football League before returning to the Cleveland Browns in 1976. He played for Cleveland Browns for two more seasons before retiring from the game. Warfield was named All-League six times and participated in eight Pro Bowls.

He was also inducted into the Cleveland Browns Ring of Honor in 2010. Warren G. High School erected a lifesize statue of Warfield in 2013. His record is 427 passes for 8,565 years and 85 touchdowns. Warfield’s 20.1 yards per catch mark is still considered the best in the history of the game.

In 1964, Paul Warfield married Beverly Keys. They have two children. Warfield lives in retirement in California.