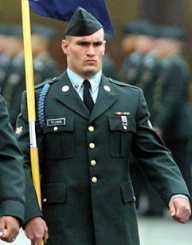 Pat Tillman was born on the 6 November 1976 in Fremont, California to Patrick Tillman and Mary Spalding. He was one of three boys.

After 9/11, Pat Tillman and his brother Kevin, also a professional sportsman, decided to enlist in the U.S. Army. In May 2002, Tillman joined the U.S. Army Rangers. And after completing basic training became a member of the second battalion of the 75th Ranger Regiment in Fort Lewis. He was sent to Afghanistan in March 2003 and on the 22 April 2004, he was killed by friendly fire when Sgt. Greg Baker mistook him for the enemy and fired several rounds into his stomach.

During his lifetime Pat Tillman received awards and recognition for his academic as well as his sporting achievements. At university, he won the Clyde B. Smith Academic Award (1996/1997), the Sporting New Honda Scholar-Athlete of the Year (1997) and the Sun Angel Student-Athlete of the Year (1998). In 2010, Tillman was inducted into the College Football Hall of Fame.

Posthumously he was awarded the Purple Heart, the Meritorious Service Medal, and the Silver Star. He was also promoted to Corporal.

At Glendale Stadium, the plaza surrounding the building was named the Pat Tillman Freedom Plaza in 2006.

Before enlisting in the U.S. Army, Pat Tillman his high school girlfriend and long time partner Marie Ugenti. Tillman’s wife wrote a book about coping with loss entitled: The Letter, My Journey Through Love, Loss & Life by Marie Tillman. His widow has remarried and runs the Pat Tillman Foundation which provides scholarships for veterans and their spouses.

In 2010, Amir Bar-Lev directed The Tillman Story dealing with a perceived cover-up of the circumstances of Tillman’s death and his family’s fight to find out the truth. The film won the Grand Jury Prize (2010) at the Sundance Film Festival and was also named Best Documentary (2010) by the San Francisco Film Critics Circle, the Florida Critics Circle and the St Louis Gateway Film Critics Association.