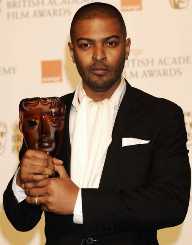 Noel Clarke was born in the UK in December 1975 to an immigrant couple from Trinidad. His mother was a nurse and his father a carpenter. Later, when his parents separated, his mother raised him as a single parent in a modest house on a council estate in West London.

Noel Clarke did media studies at the University of North London and later took drama classes at the London Actors Centre.

Noel Clarke also did theatre and won an award for his acting in Where Do We Live at the Royal Court (2003). He appeared in Doghouse (2009) a film about a group of man-hating cannibals. He next played a Roman soldier in Centurion. He made a name for himself in Kidulthood (2006) and later appeared in the sequel; Adulthood (2008).

Noel Clarke wrote and directed 4.2.3.1. (2010) A story about four girls and a chance encounter with diamond thieves. What If (2012) was a short film based on Rudyard Kipling’s famous poem. He appeared in Star Trek Into Darkness (2013) as Thomas Harewood.

In 2014, Noel was the producer and director of The Anomaly Ryan. He played Erik Williamson in The Throwaways (2015) and wrote and directed Brotherhood (2016). In 2017 he starred in, I Kill Giants.

In addition to acting, Clarke is well known as a writer, director, and producer.

Noel Clarke won the Laurence Olivier Award for the Most Promising Newcomer in 2002 for his role in Where Do We Life? Doctor Who Magazine fans voted him the Best Male Guest Actor for his portrayal of Mickey Smith (2006). He won the BAFTA Orange Rising Star Award in 2009.

Iris Da-Silva is married to Noel Clarke, and they have two children. As a student Clarke worked as a lifeguard, fitness instructor, and personal trainer.