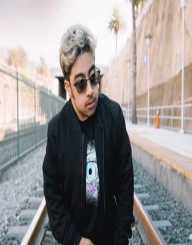 Nik Keswani was born on September 11, 1998. He is an American YouTube Personality, Vine star, and Comedian. He is also known as BigNik. He is famous for the hilarious videos that he posts on social media. He has more than three million followers on Vine.

Nik Keswani was born on September 11, 1998, in Boca Raton, Florida, United States of America. He was born to Anil Keswani and Vaishali Keswani. He has two sisters, Sarina and Devina. He is eighteen years old. He attended Torrey Pines High School in San Diego, California and Laurel Springs Academy which is an online high school. He hopes to inspire many people via social media.

Nik started his career in the most weird and sensational way. While he was undergoing a series of surgeries on his body, he made a video of himself in a wheelchair cursing nonchalantly to a tune. The video went viral two months later as it was viewed in almost all social media platforms. Millions of people found the video very hilarious. Since then he has been making hilarious videos and posting them online. He received recognition and popularity with the one video that attracted many followers to him.

His videos are accepted and watched by many people because they are original and relatable. The videos range from singing curses to six seconds of random antics that are based on daily life struggles. He has a web series titled ‘The Keswanis: A Most Modern Family’ which features fellow Viners Jake Paul and Brent Rivera. Nik wishes and dreams to make the world a better place through his videos. He battles bullies and stereotypes with ease and that he does in style.

Nik is determined and hardworking. He is a personality who portrays the Never Say Die attitude. He is a role model to people who are struggling with emotional, social and physical unacceptance. He is only three fits tall, but he is determined to show the world that it takes humility and guts and not just height to be great. He is not driven crazy by fame, but he just lives a simple life that portrays the kind of person he is rather than the kind of person people want him to be. He is an intelligent and focused student in school. He loves spending time with his family and friends. Nik saves all the money he gets from his endorsements and video clips for his studies. He loves playing video games and dedicates his fitness regime to tennis and swimming.

Nik was born to Indian parents. His mother is an optometrist and his father a medical professional. His sister Devina is a transgender. He was born with a rare form of dwarfism that left him blind in one eye. His physical appearance has never hindered him from achieving what he wants. Nik finds it hard to understand Devina’s sexuality, but he has found a way in which to support her. He has an old YouTube Account where he posts private videos.