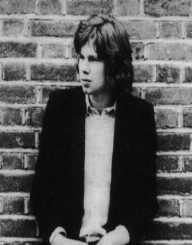 Folk musician Nick Drake was born in Burma on the 19 June 1948. His father was working as an engineer in India and the family returned to England in 1950. Roger Drake, an engineer with the Bombay Burmah Trading Corporation, and his wife was Mary Lloyd, a young woman he had met and married in India.  After their return from India, Nick Drake’s formative years were spent in the English village of Tanworth-in-Arden. He had a sister Gabriella who became an actress.

Nick Drake attended Eagle House School in Berkshire and then spent five years at Marlborough College in Wiltshire. He was accomplished at sport and represented his school as a sprinter. He also played rugby. As well as sport, Drake was also involved in music and was a member of the school orchestra.

He formed a band with school friends called The Perfumed Gardeners in the mid-1960s and left school in 1963.  After graduating from high school, Nick Drake enrolled at Five Ways, a college in Birmingham. He subsequently was awarded a scholarship to study English Literature at Cambridge University. Putting Cambridge studies on hold, he moved to France in 1967 to study at the University of Aix-Marseille and during this time would busk for money. Around this time he also began experimenting with cannabis and LSD. Returning to England in October of that year, he began his studies at Cambridge University.

Drake was continuing to write music, heavily influenced by Bob Dylan and Van Morrison. Musician Ashley Hutchings of the successful British folk group Fairport Convention had seen Drake performing at the Roundhouse in London and was impressed with his talent. He subsequently introduced him to record producer Joe Boyd who took an interest in Drake’s musical career from then onwards.

Nick Drake’s first album was Five Leaves Left (1969), and shortly afterward he gave up his studies at Cambridge University to concentrate on his music. His first album was well received, and Drake appeared at the Royal Festival Hall in 1970 where he opened for Fairport Convention. Nick Drake was signed up to tour the United States with Fairport Convention, but after initially joining the tour, he returned home because of his dislike of touring. His record producer Joe Boyd realized that touring did not suit Drake’s personality and instead, put him on a retainer and encouraged him to record.

Nick Drake’s second album was Bryter Layter which came out in 1970. Around this time Drake was living in Hampstead and was introduced to the songwriter and singer John Martyn with whom he became friends. Music producer  Boyd sold his company to Island Records and relocated to the USA where he later arranged the release of some of Drake’s music. Nick Drake’s career stalled, and he moved back home with his parents where it became apparent to them that he was suffering from severe depression. They sought help for their son, and he was placed on antidepressants. His third album, Pink Moon was produced by Island Records and was well received but not a commercial success. Nick Drake’s mental state deteriorated and on the 24 November 1974; he died of a prescription drug overdose at the home of his parents. The coroner's verdict was suicide, but some felt that it possibly could have been an accidental overdose.

Later musicians re-discovered Nick Drake’s music, and the story of how this unfolded is told in a 2004 documentary which was narrated by Brad Pitt, Lost Boy - In Search of Nick Drake. Artists such as REM and Norah Jones have both said that they were heavily influenced by Drake’s music. Nick Drake’s sister Gabriella was instrumental in keeping her brother’s musical legacy alive. There have also been various biographies published on the life and music of Nick Drake.