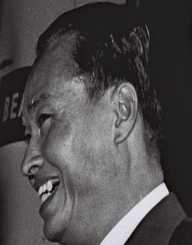 Ne Win was born on May 14, 1911, in the village of Paungdale, Burma as Shu Maung. In 1929, he began attending Rangoon University where he took biology. In 1931, he was forced to quit college after he had failed to pass a specific test. He left college and joined the Dobama Asiayone. Dobama Asiyaone was an organization that was in search of Burman Supremacy as a country. In 1941, he was selected for military service. He later formed the Burma Independence Army along with revolutionary Aung San. In 1949, Ne Win was appointed the Chief of Staff of the Armed Forces. In his post, he made changes in the structure of the army.

In 1958, Ne Win became the Prime Minister of Burma succeeding U Nu. In 1960, he stepped down after U Nu took back his position. In 1962, he was involved in a coup that overthrew the Burmese government. He took the country’s power and in his capacity dismissed the legislature and the constitution. Ne Win established the Union Revolutionary Council and declared himself the Prime Minister. In the same year, he traveled to the United Kingdom, Switzerland, and Austria stating that he needed to visit doctors.

In 1963, Ne Win declared that 50 and 100 Burmese Kyat notes not to be accepted. People were not happy with his decision and the Kayan tribe of Burma revolted against Win’s government.  In the same year Ne Win turned all industries into government enterprises and stopped any other industries from coming up. This law causes many foreigners who had invested in Burma to relocate to other countries. In 1964, he formed the Burma Socialist Programme Party which introduced the principles of Marxism, Buddhism and staunch nationalism. With his own words he called the principles a Burmese Way to Socialism. During this reign government hospitals were built to provide free health care. In 1965, laws that abolished land rent were introduced to empower farmers. The economy was so bad because Ne Win did not allow international trade. Win made the lives of the Chinese people unbearable.

In 1967, he took his hatred a notch higher when Chinese schools and their students were burnt and raiding of shops which led to riots. In 1974, Ne Win dissolved the Revolutionary Council. He cleared Burma a Socialist Republic country. Ne Win made himself President and appointed Brigadier General Sein Win as Prime Minister. In the same there were demonstrations that opposed the rule of the government at Rangoon’s Thamaing Textile Factory and Sinmalaik Dock Yard where so many demonstrators were shot. In 1981, Win resigned as President and General San Yu became the next President. Win was however still the sole authority of the country.

In 1982, Ne Win passed the Citizenship Law which declined to grant citizenship to the Burmese Chinese population. The law led to the Chinese being denied admission into institutions that taught respectable subjects. In 1987, the economy of the county faced a crisis when Ne Win issued currency of 45 and 90. The previous currencies were declared illegal. People were not happy with the decision as they had to forego their hard earned savings. In 1988, he resigned from the party because of increasing protests. Two protests known as Four Eights Uprising revolted against the Burma Socialist Programme Party. Ne Win however continued to influence rule of the country until 1998. In 2002, Aye Zaw Win, Win’s son in law, was found guilty of plotting to subvert the government and given a death sentence.

Ne Win first got married to Daw Than Nyunt with whom he had a son, Kyaw Thein. He later married Tin Tin with whom he had two sons, Aye Aung and Ngwe Soe. He married for the third time, Khin May Than who had three daughters from her previous marriage. The couple had three children, Sandar Win, Kye Mon Win and Phyo Wai Win. Khin May died in 1972. He later married Ni Ni Myint. He died on December 5, 2002, during home detention in Yangon, former capital of Burma. He was not given a grand funeral hence his daughter, Sandar Ne Win scattered his remains into the Yangon River.