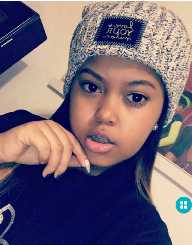 Nia Kay came from a middle-class family and was born in the American city of Chicago in the state of Illinois on 8th December 2001. Nia started out singing from her infancy and was a regular act in her mother’s salon. At the time she left 6th grade, Nia did so with honors, and it was at the same time she was filming “The Rap Game.”

Since her family places such huge premium on education, Nia Kay plans to get into high school as planned. She brims with positive attitude and works on inspiring other teens to reach the heights they desire.

Nia Kay was able to get a healthy start in her musical career since she enjoyed such huge support from her parents. Getting off on the rapping block was for her a medium for self-expression. When Nia Kay got auditioned for the Jermaine Dupri’s The Rap Game, she scored a lead role and had since put up such likable display. Nia is focused on mastering the rap genre, and her expressions so far cut. The Rap Game is under the direction of the acclaimed Queen Latifah and Jermaine Dupri. The boot camp is a ten week- affair which aims to pick the best act from the class. The winner is given a label contract and decorated with the neck chain permission of the label.

Rap music to Nia is the means of personal expression, and this conveys messages to youngsters across the country and the rest of the globe. Nia Kay describes her work as a motivational guise to get the youths from their slumber and be productive. The boot camp experience was one that taught Nia to be determined and strong in the music business. She has imbibed the ethos that to be a success in the music world; she has to get her mind right and primed.  Nia was given a chance to understand that the music world does not provide handouts and only those who work at it gets rewarded.

Nia Kay also goes by the moniker, Duchess Nia Kay and has drawn attention to her musical talent with such freestyling and lyrical prowess. As is the norm with most child acts, Nia busts into public consciousness with the YouTube video she made at age 10. The release earned her more than 2 million views by the time it made it to Facebook.

Nia Kay has a huge following on Facebook while her Instagram followers already spill past the 500,000 mark. She has worked with the likes of Famous Dex to lay a song titled ‘Drip,’ and she is looking to doing more with other acts.

Nia’s exposure to the pair of Queen Latifah and Jermaine Dupri while still in her teens is such a mileage that doesn’t come easy. She has made several stops at the wave-making radio stations across America to reach out to fans. Nia Kay talks about her inspiration as coming from what the people around her have experienced. When she can relate to these experiences, Nia can lay it under some beats and churn it out for audience delight. Talking about songwriting, she describes working in silence to write the lyrics as the best approach that works for her.

Nia Kay is quick to tell youngsters to look within them and not out there to the streets if they must become the best they desire to be. Many dreams die before they materialize Nia, but she believes working at it makes it all possible.

Nia Kay admires lady Leshurr for all her positivity and hard work she put in to create a niche for herself. The clean lyrics that Nia subscribes to and churns out is a niche she wants to keep on to down the years. Nia Kay focus in her music is to be able to reach out to others and make a difference in their lives. While the popular culture celebrates violence and shootings, she has decided to stay on the flip side with her dose of positivity. Kay believes people can alter their mindset with a good source of inspiration and this is one area she is committed to when she sings and posts her works online.

Nia Kay is celebrated as a songwriter and rapper, and her songs include ‘Extra’ and the ‘Naw Frrl.’ These two singles were released with her as the solo act. However, she has appeared as a duo at some point. The group of two is called Diary 4 Two.

Other Abilities And Aspirations

As a student, Nia Kay excelled at school and was always making As in her subjects to show how brilliant she is all the way. She has also taken time to learn the saxophone by attending classes to become adept at this. She also takes classes for piano and violin mastery. Kay is working on her act by taking dance lessons so her stagecraft can be at its best.

Nia Kay was an early admirer of the likes of Nicki Minaj and the inimitable Lil’ Wayne. Having under her belt the Chicago can-do spirit is one thing that she does not overlook. Nia loves her home-girl, Nicki Minaj whom she adores and looks up to in her career. She celebrates the success of this pop icon and expectedly wants to achieve the same heights that Nicki has reached in her lifetime.

As she grows in the music industry, Nia Kay looks forward to touring the world and putting smiles on several faces across the globe with her music.